Detectives from the PSNI’s Public Protection Branch have welcomed the conviction of a 33-year old man for arson with intent to endanger life.

The perpetrator was sentenced to four years imprisonment, half to be served in custody and half to be served on licence at Newry Crown Court earlier today, Wednesday 20 February, for starting a fire within the home of his then partner and preventing her from escaping on 17 February 2018. A 5 year restraining order will also be imposed on the offender upon his release from prison. 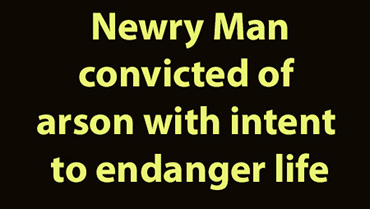 Detective Inspector Gary McDonald said: “This man’s horrific actions could have ended a 32 year old woman’s life and left three children without a mother. I welcome the fact that he is now behind bars.

“The perpetrator poured accelerant over the victim’s sofa and set it alight and when the victim tried to run to a window to raise the alarm, she was pulled back. The victim suffered injuries due to smoke inhalation and was transferred hospital where she remained for almost two weeks.

“This was an extremely traumatic incident which will have a long lasting impact on the victim who thought she was going to die. One year on, the victim continues to suffer flashbacks of the incident and from multiple health problems caused by the smoke inhalation.

“Whilst nothing can take what happened away, I hope the victim gets a sense of closure from knowing that her attacker was brought before the courts.

“I want to commend the bravery of the victim involved in this case and hope that the conviction sends out a strong message to victims of domestic violence that we will do everything we can to prosecute offenders.

“This kind of abuse can happen to anyone and often leaves victims feeling frightened. Unfortunately many incidents of domestic abuse go unreported but I want victims to know there is help out there. I would encourage anyone who is affected to contact Police on the non-emergency 101 or, in an emergency, always call 999.

“A 24-hour Domestic and Sexual Violence Helpline is also available to anyone who has concerns about domestic or sexual violence, now or in the past on 0808 802 1414.”