Taking place at the iconic music venue on Sunday 26 October, the event is set to recreate the magic of the band`s heyday playing throughout Northern Ireland.

John Rogers, promoter of the show, said: “During the early days of the Northern Ireland Troubles it wasn`t a great time for music fans in Belfast. Major acts detoured away from the country and as a result the live music scene all but died.

Among the few who took the risk and played was Northern Ireland`s finest guitarist Rory Gallagher and legendary Celtic rockers Horslips.

The Ulster Hall was an important venue for the band in their heyday so there was no question for me about where we should stage this show.

We are also happy to announce the show is in association with Ulster Bank Belfast Festival at Queen’s and will join a fantastic programme of events set by the Festival this year.” 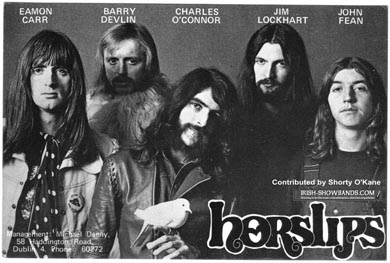 Horslips’ final show was on 12 October 1980 and the band chose the prestigious Ulster Hall as their farewell with no public announcement, just an encore of the Rolling Stones song, The Last Time, and Charlie throwing his mangled fiddle into the audience.

Also, 40 years ago in October 1974 Horslips played what would become one of their most memorable concerts in Belfast at The Ulster Hall, touring with their album, Dancehall Sweethearts.

Now four decades on from Dancehall Sweethearts and 34 years, almost to the day, after their final show, the band returns to Belfast to recreate the magic of their Ulster Hall days.

Jim Lockhart said: “Everyone knows The Ulster Hall is special for us. Our last ever gig was there, well we thought at the time it was our last ever gig. Charles O’Connor is still looking for the fiddle he threw out into the crowd.”

Barry Devlin added: “We finished in 1980 simply because we were knackered. We’d done 10 studio albums and two live ones in just under eight years and we’d played about 1700 gigs.

We are looking forward to getting back into The Ulster Hall again and I still have the programme from the 1967 Queen’s Festival. So I’m delighted to be linking up with it again through City Of Rhythms Promotions.”

Special guests are Belfast band The Ex Producers. U105 Drivetime star, Johnny Hero, is their drummer.

Tickets are available online, from the Ulster Hall and Waterfront Box Offices and by calling 028 9033 4455.

There is a Credit/Debit card handling charge of £1 per ticket for bookings made by telephone. A fee of 50p per booking is payable for tickets forwarded by post. Online bookings attract a charge of just £1.50 per transaction.

For more information about Horslips visit: