She said: “I am proud to say that I am part of a dynamic arts’ collective called ‘idir meaning ‘between’. Our first major exhibition ‘group ego trip 1’ curated by David C. Terry, is at the invitation of the New York Foundation for the Arts, 20 Jay Street, Brooklyn, NY 11201 opening Thursday, 9 October @ 6pm, with special guest  ‘Hozier’. So spread the word and share this invite with friends, families and loved ones in New York. Exhibition runs until 30 January 2015. You can also visit our Facebook page to hit Like button:” 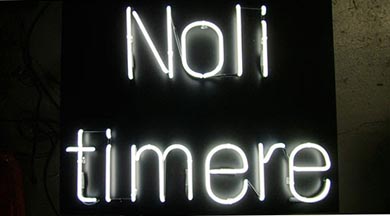 Noli timere: Killyleagh artist Deepa MAnn Kler is collaboration in an art project about the late poet Seamus Heaney that will be opened in New York.[/caption]

Seamus Heaney’s last words were ‘Noli timere’. Michael Heaney, Seamus Heaney’s son described how the poet and Nobel laureate, who died at the age of 74, on the 30 August 2013, had chosen Latin for the message to his wife, Marie. MIchael said: “His last words were in a text message he wrote to my mother just minutes before he passed away, in his beloved Latin and they read, ‘Noli timere – ‘don’t be afraid’.”

Deepa added: “Heaney’s words had a magical effect of shining light into darkness, at a societal, community and individual level. He epitomised the poet as a wellspring of humane insight and artful imagination, subtle wisdom and shining grace. To create ‘Noli timere’ in neon, allows Heaney’s final message to shine with a deserving brightness.

“Neon is filled with gas that pulses into life and emotion as electricity courses through it. It bursts with optimism and reflects the same journey that the text message from Heaney would have taken through the ‘invisible wires’. It was a brilliant stroke of Heaney’s, as a man who lived by his words, to leave his last words that could only be taken as serious poetic insight.”