NEWCASTLE’S Hallowtides Festival was a triumphant success as tens of thousands of eager spectators and participants descended on a bright but chilly afternoon on Saturday to enjoy the finale of the Hallowe’en season! This festival has now become the most popular spooky destination in Co Down.

The Chairman of the Newcastle Councillors Group, Councillor Eamonn O’ Neill, who attended the event said: “I was overwhelmed with the crowds who took to the streets of Newcastle on Saturday. I wish to convey my sincere thanks not only to the staff from all sections across the Council who were involved in delivering this event, but offer a special thanks to the Newcastle Chamber of Commerce, the shopkeepers, sponsors, the schools and indeed the wider community who all made such a huge effort to create an event which was thoroughly enjoyed by the people of Down district. It was enjoyed by many who travelled to Newcastle from far and wide for the Hallowtides celebrations.”

This year’s Creatures and Crazies Fancy Dress Competition did not disappoint as the quality and imagination of the entrants amazed the judges and made the selection of the winners in all three categories extremely difficult.  – so it was well done to everyone who entered!

The music and mayhem were provided by Cool FM’s Connor Phillips on the Festival stage as he fired up the crowd in preparation of the arrival of the Legions of Doom and Bedazzling Floats.

Flanked by the popular Dark Order stilt walkers, Councillor Eamonn O’Neill and Audrey Byrne, Chairperson of Newcastle Chamber of Commerce led the parade followed by a fabulous trail of local schools bedecked with their hand-crafted Hallowe’en themed masks and school crests accompanied by lots of parents and teachers to boot.

St Malachy’s Accordian Band from Kilcoo led the spectacle of the weird and wonderful parade as it made its way from the Slieve Donard Resort and Spa and was met by a huge, eager and excited crowd. The Ghostbusters from the South Eastern Regional College, Downpatrick campus, led by Ciaran Harper, Ryan Meehan and Peter Jones charged their ecto-blasters and took to the streets of Newcastle with Mr Staypuft on Stilts aka Austy Finnegan and their Ecto-1 car driven by Ghostbuster driver Billy Finnegan alongside some of the wonderful characters from local and community groups including Tennis, Gaelic, Boxing, Hockey, Jujitsu, Castlewellan Youth Clubs, all who were enthusiastic and entertaining! 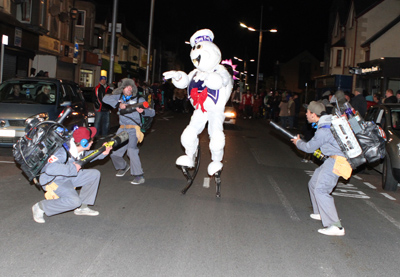 With the Crimson Arrow Pipe Band providing a musical treat and keeping both the parade and crowd enthused with their party music, the numerous stilt performers scuttled and crept through the parade alongside the hugely impressive Cyborgs. The stiltwalkers intermingled with the ingeniously designed and decorated floats from our most prominent clubs, bar and community groups including O’Hare’s Lounge Bars, Cafe Creme, The Scouts, The Harbour House Inn, The Donard Bar, The Newcastle Comhaltas and The Anchor/NCC.

As the parade reached the festival stage, Connor Phillips invited the South Eastern Regional College (Lisburn Campus) dance students to perform their ‘Thriller’ routine which was warmly applauded by an appreciative audience.

Councillor Eamonn O’Neill was welcomed onto the stage. He praised the efforts of Newcastle traders and community groups for putting on such a fantastic display and expressed his delight with the huge attendance and the family atmosphere in Newcastle during the day.  Cllr O’Neill continued with the prize giving for the hugely popular Order of the Griffin Fancy Dress Competition which once again had a very high quality of entrants.

The Best School Mask Display was won by St Joseph’s PS, Carnacaville, in a close run contest and thanks must go to the children parents and teachers who worked so hard to create their school masks and displays.

After much debate and deliberation it was announced that The Donard Bar with their Nightmare on Donard Street creation were the winner and they were awarded a beautiful hand carved wooden plate. Again congratulations to everyone involved in this year’s parade which sets a high standard for 2013!

As the themed music, including “A Punk”, “Shake it Out”, “We are Young”, “Champagne Supernova” and “Rolling in the Deep” resounded, the crowds joined Connor Phillips count down to another amazing fireworks display as colour, light and sound filled the sky and everyone gazed skywards in awe and showed their appreciation at the finale with rapturous applause.