The site of  the old Council offices is soon to be cleared to make way for a new development which will pave the way for the regeneration of the east side of the town. The local authority says there is no significant historical value to the former Council office buildings, but a clear site will bring significant economic benefits to the area as the potential buyers will have access to a prime development site. 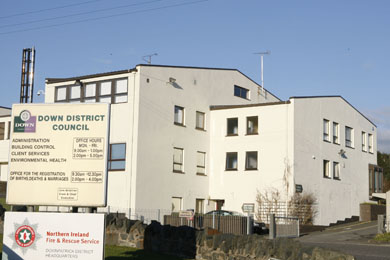 The former Down District Council offices on the Strangford Road now soon to be demolished.[/caption]

It is understood that Council officials were concerned also about the possibility of an arson attack on the premises and the effect that may have on the neighbourhood following similar attacks on the  Pound Lane Clinic and St John’s Residential Home in Downpatrick, and the repeated stripping of wire and other valuables from the old Downe Hospital.

The Council took the unanimous decision while ‘in committee’ to demolish the building and is somewhat concerned that an individual Councillor is now questioning the corporate decision.  In February 2013, the Council came to its decision after having considered all aspects including the historical value of the building, the cost of renovating it, it’s future use and the effect is has on the value of the site.

Down District Council’s Vice Chairman, Councillor Gareth Sharvin said:  “I am glad that a decision has been agreed, to allow this project to move forward. This is the first step in an important regeneration project. The former workhouse Reception, which has been part of the Council’s administrative offices since the 1970’s, has been dramatically changed internally over the years and resembles nothing of its past use. Some concerned local people have commented that a heritage centre could be developed but Down District Council’s County Museum already encapsulates the history and heritage of Downpatrick. It delivers a service that ensures the story of Downpatrick can always be told.”

“The site is of a substantial size and given that Down District Council has no further use for the building nor does it have any budget to renovate or upgrade it, it has huge potential and could fulfil a range of uses.  Council has considered the best options for the future of the site and this includes ensuring that we can obtain the highest price if we can offer a clear site.  It is the Council’s duty to the ratepayer to maximise the value of the Council’s assets and to ensure the site is more saleable this demolition work is necessaryad,” added Councillor Sharvin.

A demolition firm is currently being appointed to carry out the work.