<![CDATA[ <p style="text-align: justify;">Nothing says ‘Christmas’ quite like Dickens, especially by candlelight, so Down Arts Centre is delighted to welcome back Pip Utton with his masterful performance of Dickens reading ‘A Christmas Carol’, on Friday 11 December at 8pm. 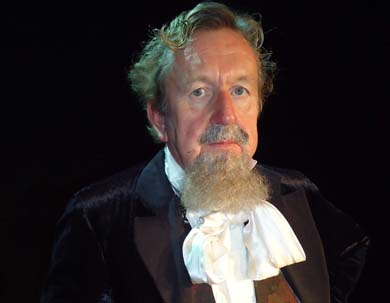 Pip Upton will read A Christmas Carol by Charles Dickens at the Down Arts Centre.[/caption]

During the last twelve years of his life, Charles Dickens toured Britain and the USA reading his writings professionally to his adoring public. The most popular of all these readings was ‘A Christmas Carol’. It is perhaps the most famous Christmas ghost story ever written. In this almost totally candlelit performance and looking uncannily like Dickens, Pip Utton recreates the famous author’s public readings using the script and directions that Dickens himself used.

Pip Utton is recognised as a leading performer and writer of one-man drama. His performances as Adolf Hitler, Francis Bacon, Charlie Chaplin, The Hunchback of Notre Dame, Charles Dickens, Winston Churchill and most recently as Margaret Thatcher have received rave reviews and won him many awards throughout the world. Pip’s performance as Dickens has been described as, ‘an enchanted start to the Christmas season’, ‘absolutely captivating’ and ‘a masterful performance’. He brilliantly brings to life all of the characters you know and love, from Ebenezer Scrooge to Tiny Tim, so book your tickets now and get your Christmas celebrations off to a magical start.

Date for Your Diary: The new season of performances, classes and workshops at Down Arts Centre, from January – April 2016, will be open for booking on Tuesday 8 December at 10am. Check out our website: