GIVEN the euphoria of last weekend’s Jimmy’s Ten renewal, the subsequent Siberian weather leading to the postponement of the Larne half marathon and Castlewellan’s Spring Lakes 5 and 10K races on Sunday, has brought into sharp focus just how lucky we were with almost balmy conditions on St Patrick’s Day. It also provides time for some reflection on some significant Club performances writes Joe Quinn.
JUNIOR RACES

With ASDA generously sponsoring the Junior Jimmy’s races around a cordoned off section of the car park the day started brightly and over 70 boys and girls took advantage of the traffic free area to show their potential.  The car park outside the supermarket is an ideal location not only for these races but also provides ample space for the hundreds of runners to gather before setting off on the main event, Jimmy’s 10K. And the Club are indebted to ASDA management for their welcome and hospitality.

Among many good Club performances perhaps the most eye-catching was James Savage’s 38.38 in his first ever 10K and as he looked fairly comfortable as he finished there is surely much more to come from him. Peter Morgan 42.06 and Dermot Cahill 42.10 were 2 more to excel as they finished just ahead of Tony Brennan 42.16, Cheryl Denvir 42.31, first of the ladies back, and Stephen Heasley 42.49 all finishing within 45 seconds of each other. [caption id="attachment_37400" align="alignleft" width="390"] 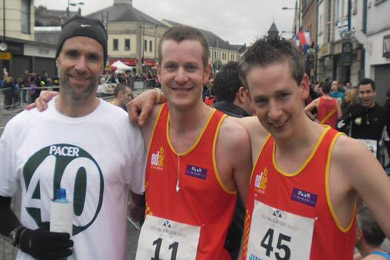 Philip Vint, Dermot Cagill and Michael Cultra after the Jimmy’s 10 Downpatrick.[/caption] John Manley, in his first outing in club colours, and didn’t the new vests look well? set a new PB too, crossing the line in 48.59, just 1 second behind Colum Surginor who improved by 42 seconds on last year’s time.  Who says structured training doesn’t pay off? GIVE MY HEAD PACE

A very happy Aurla Mc Loughlin clocked 49.59 to break the elusive 50 minute barrier.  And here a word of praise must go to the  Pacers, a popular innovation introduced 3 years ago, who this year were Phillip Vint, Mark McDowell, Simon McGrattan and Denis McKay.

But PBs are a very personal thing, to be the cause of personal satisfaction in quiet moments of reflection and used as motivation to equal or improve on at some later stage.

The Club extends a Huge Thank you to everyone who helped make the day such a success, especially those who contributed food and helped out at the post race refreshments EAST DOWN ABROAD

Further afield this weekend Declan Teague gave the new vest its international baptism in the Gibraltar Half marathon where a heavy shower of rain was much appreciated to help cool competitors in the 16/17C temperatures – remember them? There was none of the sophisticated online pre-entry about the event, just turn up 1/2 hour before race start time, avail of the free entry and run!

The race began with three laps on a proper athletics track and then 3 laps of a town circuit, a slow incline on the way out for each lap but flat most of the way back and then one and a half laps to finish in the stadium again. He was fifth overall in the race in a splendid best time of 1.24, which should be a real confidence booster for a crack at a sub-three hour marathon in the not too distant future.

Meantime he has his sights set on the Malaga Half Marathon in two weeks time, to further reduce his PB. Spare a thought for Declan who is missing all the early Spring weather here but who did send an excellent day for Jimmy’s Ten last weekend.

If there are images in this attachment, they will not be displayed.  Download the original attachment
Sheet1
]]>