With the tournament sold out, over 107,000 spectators have flocked to Royal County Down to see some of the best golfers in the world battle the elements in a bid to take home the trophy on Sunday. 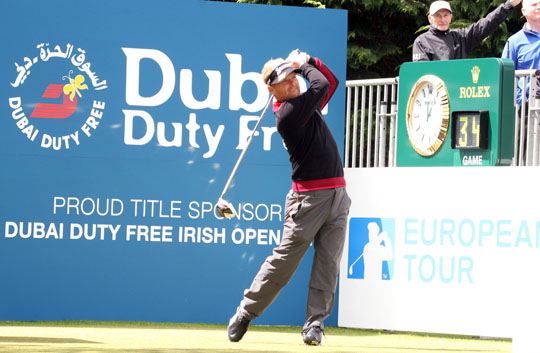 Minister Jonathan Bell said: “In the run-up to the tournament, the Dubai Duty Free Irish Open was described as ‘unmissable’ and that has certainly proven to be the case. Golfing fans are voting with their feet and proving once again that when Northern Ireland hosts a major event, it really is special. 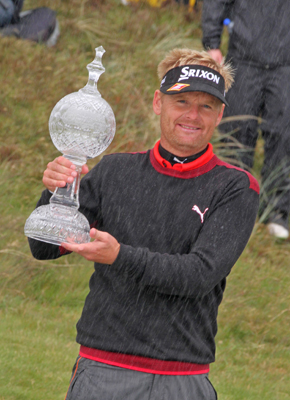 “Just as we did in 2012, when the Irish Open became the first European Tour event in history to sell out, this year’s event is putting Northern Ireland’s golfing tourism product front and centre on the international stage.

“Images of the stunning county Down coastline, with the majestic Mountains of Mourne as a dramatic backdrop, are being beamed right around the world as the international media spotlight focuses on this sell-out tournament.

“Many of the world class line-up used social media to say how impressed they are with the beautiful scenery, the course and the huge crowds which have flocked to Royal County Down to be part of this wonderful event…  and that is the sort of positive publicity money simply cannot buy.”

Paying tribute to the ambassadorial role played by Rory McIlroy, Darren Clarke and Graeme McDowell, Jonathan Bell added: “Northern Ireland is in an unprecedented position of being home to three Major winning golfers, one of whom is the current World No.1. 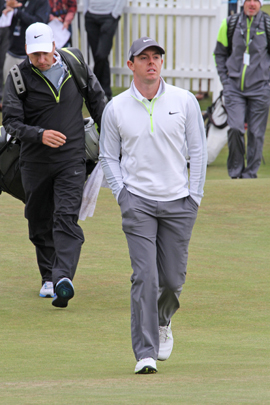 Rory McIlroy walking over to the first tee box.[/caption]

“No wonder that so many people want to walk in their footsteps and play the courses that nurtured their game right through from amateur to champion level. And while, so far, things may not have gone as we would have liked them to on the course for Rory McIlroy, he has done tremendous work in bringing a top quality line-up to the club at Royal County Down.

“As a sport, as a business and as a tourism asset, golf operates on a worldwide scale so there has never been a better time to tap into its potential. That is why my department, through Tourism NI, recently launched a new Golf Strategy for Northern Ireland, which aims to grow the value of golf tourism to £50million a year by 2020. The importance of golf tourism lies in attracting high spending visitors. Research suggests that for every £1 spent on green fees in Northern Ireland a further £4 is spent elsewhere in the local economy. I want to see tourism here grow to become £1billion industry by 2020 and I believe golf has a major part to play in achieving this objective.”

Tourism NI Chairman Terence Brannigan speaking at a press reception on Thursday evening in the sponsor’s centre at Royal County Down said: “Northern Ireland is definitely made for golf. We have set ambitious tourism targets for the next ten years and we want to create 50,000 jobs, and the 2015 Dubai Duty Free Irish Open is a very important part in our campaign. 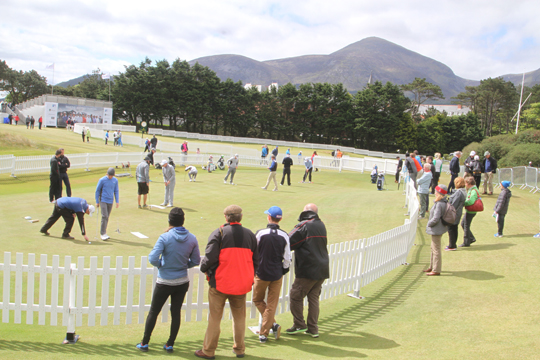 Around the practice green at Royal County Down.[/caption]

“We will be running a TV campaign… we are definitely taking golf seriously. Golf tourism generates £35million per annum into our economy and the average spend of a golfer is twice that of a normal visitor.

“This has already been a memorable event and the hospitality by the organisers and hosts has been excellent. The Rory Foundation and Rory McIlroy has played a key role in bringing this Open to Northern Ireland and so many people have been involved too in making it happen from the sponsors, the political support right down to the 600 plus course marshals at the event. The marshalling has been very friendly and hospitable. We now have an epic three days to look forward to with some of the best players in the world.”

Many visitors to the Newcastle seaside resort have been amazed at the level of attention to detail from Newry Mourne and Down District Council to cleansing the streets and planting out flowers etc. Newcastle  is certainly is terrific shape now to enjoy the rest of its tourist season. 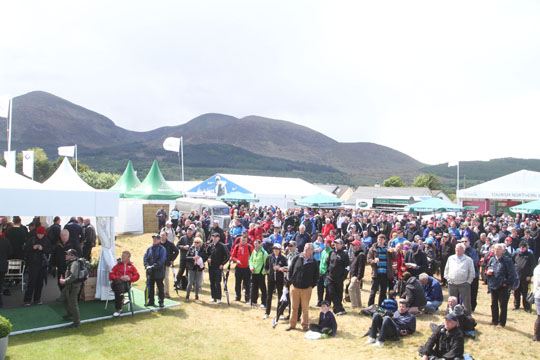 A section of the crowd enjoy a view of the big screen near the leader board in the tented village during the Dubai Duty Free Irish Open.[/caption]