Since She was six years old she has loved to kick a football around and her parents had no idea back then that she would one day play for the Northern Ireland ladies’ team.

Amy’s rise to fame really started when she was in the under-11 category and played with the boys’ team in the Downpatrick Youth Football League. She showed a great talent and was a solid member of the team not missing practices or matches. 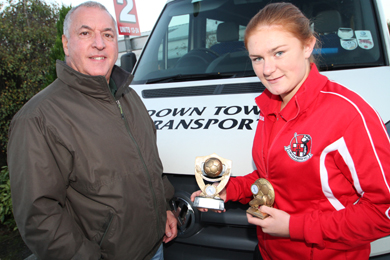 “‘When I was young I really enjoyed playing in the under elevens every weekend. But when I was over twelve I had to join a girls team it was then that things started to happen for me. I played through the junior ranks and joined Linfield for a while then the Crusaders. Eventually I found a place on the Northern Ireland squad.

“I was training almost every night either with the Crusader team or for Northern Ireland and football became my life. It meant a lot of travelling about for my parents and family who were brilliant in supporting me.

‘Recently I scored my first goal for Northern Ireland – it was a header – against Latvia. I was absolutely delighted as I usually play full or half back. In the past couple of years I have been to Latvia, Estonia, Holland, France, and to Scotland, England, Wales and Ireland on my travels with the Northern Ireland ladies’ team. It has been hard work and a very enjoyable experience. The squad is really fun to be with and we all get on great. “

But Amy has plans for the future. She hopes to study in the United States on a sport scholarship. She said: “Ladies soccer is much bigger in the US. In the UK there are only about seven professional lady players. It would be great to get up to that standard. I hope to go on and study PE, Social Care and Geography at A-Level at the Assumption Grammar. My school and friends at school have been a brilliant support to me over the past few years.” And if you thought that Amy’s education may have suffered because of her dedication to the soccer cause, you’d be wrong. When she sat her GCSE’s this year she got straight A’s!

Amy even has a growing fan club stretching from her home town of Drumaness and her school in Ballynahinch, and beyond and even former Manchester United player David May is a great supporter on Twitter. “The community have been a huge support to me and my family who are also all football fans are right behind me. It’s just great to know they are all there rooting for me.”

“The IFA management who look after the Northern Ireland ladies soccer team are second to none. They build us up and treat us like stars. Quite often we have days and stays away in top hotels and we are very well looked after. It certainly makes me feel like a top level player. 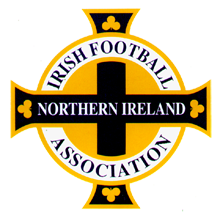 “A short while back I had a very serious leg muscle injury and the management were just brilliant. They ensured I received the very best medical treatment and I was back in form soon enough.

“Football just seems to be in my blood. My 17-year old brother is in the Drumaness team and my father plays in the ‘International’ scene for the Northern Ireland Over-40’s. Our whole family just revolves around football.

“It was quite funny that my parents recently opened a food bar in Castlewellan and they were looking for a name for it.  I suggested ‘On a Roll’ because they were all keeping me going that I was literally ‘on a roll.’ The name stuck!

“I’d just like to thank all the people who have helped and sponsored me. They have been fantastic. I could not have done it all without them.”

Amy is supported by several sponsors and one sponsor Downtown Transport manager Bob Parkes said: “We are at Downtown Transport delighted to support Amy in her sporting endeavours with bus transport. She has done extra well to get to the top and we wish her and her Northern Ireland and Crusaders ladies’ teams well in the future.”

IFA Grassroots coach Seamus Health who works in Down District said: “Amy has attended a number of my soccer camps over the years and is an excellent player.

“When she was under eleven she could hold her own with the boys. She always showed strong potential. I am delighted that she is considering a scholarship in America as ladies’ football is massive over there and she will benefit enormously from the experience.

“There is an increasing number of young girls now participating in soccer. The captain of the Northern Ireland team Ashley Hutton played for Arsenal as a young girl in the under-16 category and moved back to Linfield where Amy also once played. I would encourage all young girls to try out playing for a youth team.”

And the future looks bright for Amy.

Down News has just one thing to say … ‘Go Amy Go!’