<![CDATA[ <p style="text-align: justify;">The Downshire Civic Centre extension and refurbishment, which was part of the former Downshire Hospital, now housing the Down District Council offices, the NIHE and NIFRS, has been highly recommended at an award ceremony.

The Northern Ireland (Royal Institute of Chartered Surveyors) RICS Awards showcase the most inspirational regional initiatives and development in land, property, construction and the environment. These awards were open to everyone working within the property profession and celebrate the talents of surveyors, property developers, engineers, planners and architects, to name just a few. 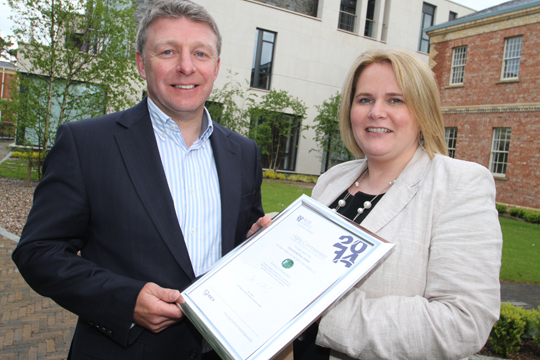 The Downshire Civic Centre was highly commended in the category of Building Conservation at the RICS awards on Thursday 8 May 2014 in Culloden Estate and Spa, Belfast.  This Award recognises and honours the highest standards of restoration and renovation, and pays particular attention to the sensitivity of any adaptation which ensures the survival of a building well into the future.

Speaking about the award for the Downshire Civic Centre, Down District Council Chairperson, Cllr Maria McCarthy saidL “I am delighted that the Downshire Civic Centre project has been highly commended in the category of Building Conservation. This award showcases the outstanding work which our project team carefully considered in terms of conserving and renovating the old part of the Downshire building whilst restoring it to a new use.”

The Downshire Hospital is believed to be the oldest surviving building in Downpatrick.  Part of the hospital fell out of use in early 2000’s and suffered some years of neglect and vandalism.  The restoration of the Downshire Civic Centre was driven by Down District Council who now operate and maintain the building. The building was redesigned as a Council administrative centre and a community asset.

The Downshire Civic Centre demonstrates a very thoughtful and carefully executed approach, sifting the fallen debris and maximising re-use of historic material.  Strong conservation principals and craftsmanship area demonstrated whilst recognising the need to create a facility with a sustainable future.  The restoration project conserved the original external building fabric and used the building’s heritage to guide its regeneration as a contemporary community asset.

Downshire Civic Centre was one of thirty first class projects short listed for the prestigious RICS Northern Ireland Awards 2014 which were recently held at the Culloden Estate & Spa, Hollywood. Each one of the projects short listed, whether large or small, stood out from the crowd, because they demonstrated something special. Local Main Contractor, O’Hare & McGovern nominated the Civic Centre within the Building Conversation category and the judges awarded the project the Highly Commended Award.

Peter Hazelton, Business Development Manager for O’Hare & McGovern, commented: “O’Hare & McGovern worked very closely with Down District Council and their design team to deliver the project which was well deserving of the RICS Conservation award and was an outstanding example of the positive contribution, conservation of a building can make to a local economy.”

A Possible Lifeline For The Undocumented Irish In America