<![CDATA[OVER the years the late former South Down MP Eddie McGrady helped many groups along te way. The Downpatrick and County  Down Railway (DCDR) was one group that Eddie touched on and helped in his journey through life. Gerry Cochrane, the railway's founder, said that with the passing of Eddie McGrady this week, there is a  "deep sadness"  within the Downpatrick railway members. [caption id="attachment_44617" align="alignleft" width="390"]Gerry<a href="http://www.downnews.co.uk/wp-content/uploads/2013/11/ek-mcgrady-railway.jpg"> 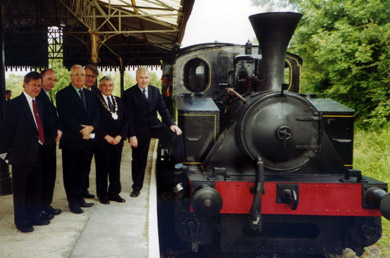 Eddie McGrady, third left, on the platform at Downpatrick rainway station.[/caption] Gerry said: “DCDR, on learning about the death of their former firend and mentor, were svery saddened. It was Eddie McGrady that we turned to for advice and support with  regards to the idea of establishing a heritage railway in the town. “I first met Eddie in 1982 when he agreed to meet me to discuss my proposals for the restoration of Downpatrick and Co. Down Railway. At that time he was Chairman of Down District Council and his reaction to the proposal would, therefore, be essential. “In the event, his enthusiasm surprised me and from that day his encouragement was instrumental in getting the project off the ground. Indeed, throughout the development he was always ready to help on the numerous occasions when difficulties arose and in the early days; as a chartered accountant he acted as our auditor in a voluntary capacity when we were struggling to establish a sound financial footing in those fledgling days. “His contribution to the success of our railway cannot be overstated and he will be sadly missed by all of us who have had the honour of his acquaintance.” Gerry’s views were echoed by fellow founder and DCDR vice-president, Mr. WF Gillespie, who said: “Eddie was at the very first meeting with Gerry and I to discuss getting the railway off the ground.  He was a great help to us in the early stages, especially in establishing our relationship with the Council. “In some of my other activities I also had reason to contact Eddie and I always found him to be a real gentlemen giving freely of his time to address the issues brought to him.  A man who will be sadly missed by all who were privileged to know him.” DCDR chairman, John Wilson saying added his tribute: “Whilst the Downpatrick and Co. Down Railway has always been apolitical in its ethos and outlook, it is fair to say that without Eddie McGrady’s vital support at the inception of the project, there would be no railway in the town today. Eddie remained a friend of the DCDR throughout the years, and we deeply regret that he will not see our 30th Anniversary in 2015.”]]>