Councillor Bailie said that she was delighted to be able to pass on her best wishes to Mickey in person and was confident that he would prove to be an “inspirational leader to the newly formed partnership”. 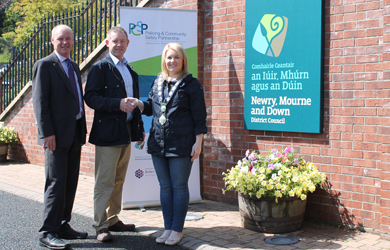 Speaking on his appointment Councillor Larkin said: “The merger of Newry, Mourne and Down provides an excellent opportunity for the PCSP to develop a meaningful, effective and realistic strategic plan for the area. This can only be achieved by continuing to engage the opinion and support of local communities to have the maximum impact on crime and antisocial behaviour.”

Cllr Larkin added: “Partnership working will be central to building safer, shared and confident communities and it must go beyond the criminal justice system and Council to work in partnership with the voluntary and community sector, the private sector and individual communities themselves. I look forward to the challenge that lies ahead and in leading the PCSP as it develops and grows.”

Mr Liam Hannaway, Newry Mourne and Down District Council Chief Executive further said: “While I am certain that challenging and exciting times lie ahead for the PCSP, I am confident that they will be safely and expertly negotiated under Mickey’s leadership and wish him every success.”