<![CDATA[ <p style="text-align: justify;">FISHERMEN in Northern Ireland are at breaking point about the state of their industry says Stephen Kearney, an Ardglass skipper/boat owner.

After a recent meeting held in Ardglass with boat skippers and owners, the ‘Fishermen of Northern Ireland’ group which comprises fishermen from across the three County Down ports of Portavogie, Ardglass and Kilkeel,  which formed just a few months ago, have decided to make a protest by blocking harbours in Belfast and the Foyle. Down  News understands that the fuel ports that would be blocked are centres that hold up to five days fuel for vessels in the harbour and a long-term dispute could cause serious disruption to marine coastal traffic and trade. 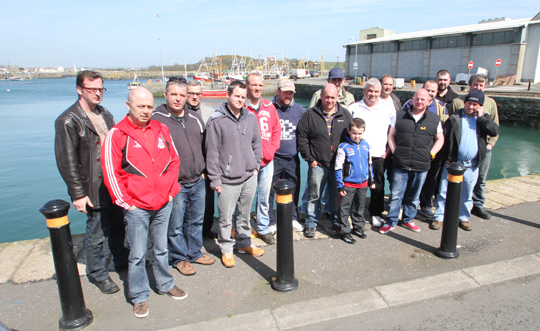 Fishermen in Northern Ireland are planning to block Belfast and Foyle ports fuel terminals for one day in protest.[/caption]

The growing support for militant action has arisen from what the group chairman Stephen Kearney says has been a “very difficult time for the fishing industry. We cannot continue along the same way as things have been done for the last number of years. We are in financial peril and many boat owners, skippers and fishermen are experiencing mortgage difficulties, marital pressures, and simply can’t put bread on the table… literally.

“This protest will last for one day initially and will be orderly in the first week in May. We have a pool of fifty vessels that will take part.  We are doing everything we can to get the message across that we need help as soon as possible. We have already met the Fisheries Minister Michelle O’Neill and we are still waiting for the Taskforce to be set up we were promised that would take a look at the industry and make recommendations.

“We hope too that the Minister will announce a decommissioning package in due course. Some of the vessels in Ardglass are getting very long in the tooth  and only this week there is word of another one being taken out of commission as it is unsound and the owner does not want it springing a plank at sea.  That is the reality we are faced with… fishing with vessels that are undoubtably the oldest in the fishing fleet in the whole of Ireland, and probably across the EU. Our fleet needs to be modernised, and it needs to be efficient and sustainable.”

Mr Kearney said: “Things do need to happen soon. Although we are heading into the traditional busy time of year over the summer months, it will no doubt be a short season like last year, and we will be back to square one by October. There is no room to diversify our fishing effort from prawns into other areas. Fish stocks are protected by the  EU quota system so we just can’t go and land fish out of quota – we would be severely penalised for this.

“It seems that farmers can get grants for ‘non-production’, but fishermen and not so lucky. We have got to make what we can in the next 16 weeks to get us through the winter. And the more we push ourselves and fish these old boats in bad weather especially through the winter, the greater is the likelihood of an accident at sea.

“We were very grateful for the emergency aid that the Fishermen’s Mission recently provided for many families in need. But we should not be in this position. We need to be treated more fairly by government – our pleas are just falling on deaf ears.

“So we need to have all the information on the table. The Scottish fishermen within the UK have received greater hardship payments than offered to the fishermen in Northern Ireland. We just want parity of esteem. I understand the Scottish government has given them £1.9 between 113 prawn and white fish vessels

“The fishermen have complied with all of the EU technical measures such as net and mesh size changes, we have satellites systems aboard charting the movement of our vessels, we comply with the quota regimes and all other regulations demanded by the EU, DEFRA and DARD. All we are asking for is a decent and fair system of hardship payments to be set up. There must be help in the EU to sort this problem out. I doubt if other fishing ports around the ports of France and Spain and other member states in the EU are experiencing pressure such as we are.

“Fishermen are on the verge of losing their homes and boats to the banks. Something must be done to stop this. That is why we are making this protest. We simply have to do something. We are getting very desperate.”