<![CDATA[ <p style="text-align: justify;">There is still time to catch the train this weekend at the Downpatrick & County Down Railway before the last summer train pulls out of the station.

The Railway is running its last trips to Inch Abbey this weekend Saturday and Sunday 13-14 September as part of the European Heritage Open Days, and in the spirit of Province-wide scheme there will be guided tours on request of the lesser seen parts of the railway site not normally accessible to the public, as well as the chance to sample the atmosphere of rail travel at its most traditional. 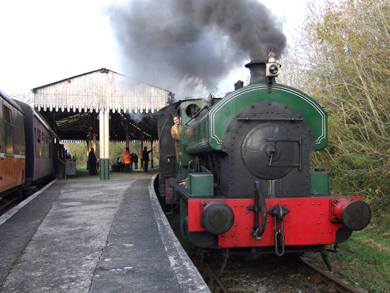 A steam train at The Loop in Downpatrick.[/caption]

After this weekend the next time the train will be out will be for the Hallowe’en Ghost Trains at the end of the October, so this will be the last opportunity people will have to let the train take the strain before it is infested with ghouls and ghosts at that spooky time of the year

As part of the European Heritage Open Days, a trip to the museum in the station building and the new Carriage Gallery brings the golden age of the railway vividly to life and looks at the impact that the railways had on people’s lives, through artefacts from the smallest such as a ticket in the upstairs exhibition, or the largest such as a lovingly restored railway carriage in the Carriage Gallery.

Children can enjoy their own “Kids’ Station” in the Gallery, and dress up as a train driver or guard. There’s also the “Thomas the Tank Engine” model railway will be back as usual.

And as a special offer as part of the European Heritage Open Days, a special train will depart Downpatrick Loop Platform on both days at 1pm – the Loop Platform, a listed building and the sole surviving original building in Downpatrick, built in 1893, and was famous for its porters’ cries of “All change for Ballynoe, Killough and Ardglass”, serving as an interchange platform for trains running from Belfast to Newcastle and Downpatrick to Ardglass on the old Belfast & County Down Railway. This special train must be pre-booked through the EHOD by calling 028 9054 3022.

From 2pm to 5pm, the train will run to Inch Abbey, and visitors can disembark and take a short walk up to Inch Abbey, where a Living History Monk, an early 13th century Cistercian Brother, walks the ruined grounds and explains the simple piety of his day.

These extensive remains are of a Cistercian Abbey founded in 1180 by John de Courcy, who led the 1177 Anglo-Norman invasion of East Ulster.

Refreshments are also served in a 1950’s ‘buffet carriage’ parked at Inch Abbey Station where you can wait to make the return journey to Downpatrick.

Tickets cost £5.50 adults, £4.50 children or senior citizens, and children aged three years old or below go free. There’s no need to book and a ticket lasts all day.

For further information on events – or if you are thinking about joining as a volunteer – log on to the railway’s website: