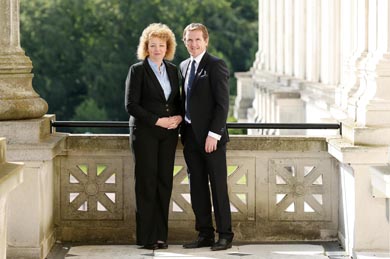 Mr McCoy has won almost every big race and sealed his 4,000th career win in the Weatherbys Novices’ Hurdle at Towcester in November.

Speaking at the reception Minister Ní Chuilín said: “AP McCoy is one of the finest jockeys of our time. Many young jockeys dream of crossing the winning post first and Anthony McCoy has accomplished this over 4,000 times.

“The list of his wins and achievements are lengthy, far too many for me to mention now, they include the Cheltenham Gold Cup, Champion Hurdle, Grand National and of course BBC and RTÉ Sports Personality of the Year.

“The young man from Moneyglass in Antrim  who rode his first winner Legal Steps back when he was 17 in Thurles has gone on to become a sporting superstar, being named Champion Jockey every year since turning professional.

“I am sure the whole of Moneyglass is very proud and I am delighted to be able to recognise his achievements here at Parliament Buildings along with his family, friends and members of the racing fraternity.

“All of this success is a result of his hard work and dedication to the sport of racing and serves as an inspiration to young jockeys not just here but across the world.”

Newry Girl To Perform On West End Stage In October