The NAFL Div 1b 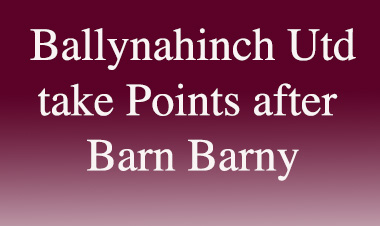 The visitors although bottom of Division 1B have been on the up in recent weeks so United’s manager Glynn Robinson was taking nothing for granted and any concerns he had were soon confirmed.

The visitors came out the strongest and it would be fair to say that they were the dominant team and thoroughly deserved their interval 1-0 lead. They had scored from the penalty spot on the half hour mark when Alastair Coburn had brought down a forward as he weaved his way through the penalty area. United’s goal scoring opportunities were minimal except for a Daniel Rice effort that was well saved with Gavin Crawford putting the rebound wide.

A completely different United team came out for the second half as they chased an equaliser with Barn proving to be dangerous on the break. Lee Martin on his return from injury was introduced and manager Glynn Robinson took the gamble of bringing on a semi fit Gary Murray into the centre of defence with Scott Brashaw moving into central midfield to work alongside Gavin Crawford, Jack Davis, Ben Wilson and Alex Burtney.

That proved to be a masterstroke as United became even more dominant and in the 70th minute a touch of brilliance from Lee Martin brought the equaliser. The chance came when Brashaw blocked a pass on the half way line and surged toward goal before passing to the right wing to Martin.

The teenager surged into the penalty area and despite being dispossessed by a defender he won the ball back before sending a fierce shot into the net. United’s ascendency was reduced marginally as Murray was withdrawn to ensure he did not aggravate his injury with Brashaw returning to his defensive position alongside Gregg Allison, Stuart McMullan and Alan Patterson.

Barn came back into the game and almost went ahead after 75 minutes however an exceptional double save by Coburn came to his teams rescue. Davis went into central midfield and became much more prominent in the closing quarter providing passes for Allison and Owen O’Neill on the right and Burtney or Stuart McMullan on the left while Ian McMullan chased every ball. It would be his perseverance that led to United winning the game but in quite bizarre circumstances.

As the game entered injury time Ian McMullan chased a through ball however the Barn goalkeeper came out and collected the ball. Unbelievably the keeper pushed the ball into McMullan’s face and he was sent off by the referee who was left with no option but to award a penalty.

Absolute mayhem followed and it took six minutes until the referee was able to calm things down for Alan Patterson to slot home the penalty despite a valiant effort to save it by the stand in keeper. The referee blew the final whistle as soon as the game restarted perhaps fearing some indiscipline which sadly proved to be the case.

United will have considered themselves extremely fortunate to gain all three points welcome while a moment of madness led to Barn missing out on the point they deserved.

This week Ballynahinch Utd travel to Dromara Village for a league game.