The Donard Fundraising Group’s Chairman Paul Madden speaking at the cheque presentation in Auglisnafin, said: “On behalf of the volunteers of the Donard group, I would like to sincerely thank the Chairman of Aughlisnafin GAC Paddy Flanagan and his committee, management, players and supporters for their extremely kind and generous donation of £340.

“The funds were raised by the Fin club during their recent Under 30’s v Over 30’s Annual Charity Fundraising Match, including contributions from spectators and patrons of Mulholland’s Bar.  Part of the donation was also raised by eighteen Gaels from several Clubs in East Down, one of which was from as far away as the Brooklyn Shamrocks GAA Club in New York. They all entered the Gaelic Life Fantasy Football competition with 50% of the entry fee being donated to the Donard Fundraising Group.

“Thank you to each and every one of you, for your widespread support and kind-hearted altruism which we genuinely appreciate.  All of your donation will go towards helping Marie Curie Cancer Care, Mind Your Mate and Yourself (MYMY) and funding to provide local publicly accessible life-saving heart defibrillators.

“A special word of thanks goes to Gerard Lenaghan, Rory Murphy and to all of the match players who participated, for giving up so much of their time, efforts and energy during this successful fundraising event – you are all a huge credit to the Fin and its surrounding locality.” 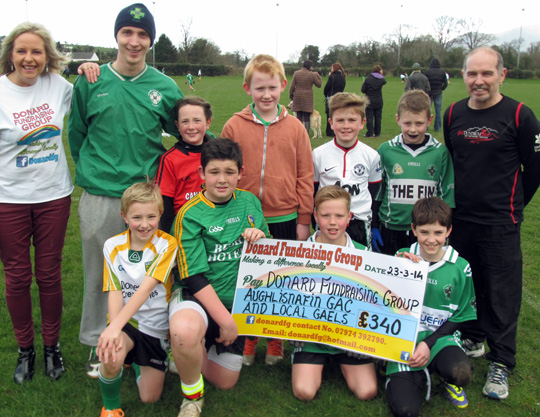