<![CDATA[ <p style="text-align: justify;" align="center">Belfast playwright Owen McCafferty’s powerful new play about truth and reconciliation wowed critics when it toured to the Edinburgh Festival last summer and has picked up a string of awards since it opened in Dublin in 2012.

The hotly anticipated play Quietly is now coming to the Lyric for one week this April and is expected to have particular resonance in the city where it is set. 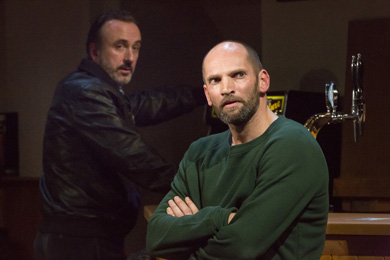 Quietly is the story of two strangers, played by Patrick O’Kane and Declan Conlon, who have a shared history and meet in a Belfast pub.  Up to this point their lives have been shaped by the events of a single night years previously.  Now they want to know the truth so they can come to terms with the past. As they work through the trauma and hurt, they gradually reach an understanding between themselves.

The play is directed by Jimmy Fay who shortly takes on the mantle of Executive Producer at the Lyric and is part of an international tour by the Abbey Theatre.

“I’m very excited that Quietly is coming to Belfast,” said Jimmy. “It is a very powerful story which audiences in Northern Ireland will get. I would urge people to come see it. As it is a Belfast play by one of our greatest playwrights it feels like a sort of homecoming and no better place to stage it than at the Lyric Theatre.”

Fiach Mac Conghail, Director of the Abbey Theatre said:  “Quietly is an important and extraordinary play about life in the aftermath of the Peace Process – it is a human, heartfelt story told brilliantly by Owen McCafferty. I’m delighted that this national theatre production will be seen across Ireland, the United Kingdom and Germany.”

Last August the Abbey Theatre toured Quietly to the Edinburgh Festival Fringe where it was hailed as one of the must-see festival shows and sold out at the Traverse Theatre during its three week run. It was critically acclaimed by the international media and went on to win three prestigious awards – Best Play at The Writers’ Guild Awards 2013, a Fringe First Award at the Edinburgh Festival Fringe, and Best Actor for Patrick O’Kane at the Stage Awards for Acting Excellence.

The cast also includes Polish actor Robert Zawadzki who made his Abbey Theatre debut when it premiered on the Peacock stage in November 2012.

Quietly runs on the Danske Bank Stage at the Lyric from Tues 8 to Sun 13 April, including Saturday matinee at 2.30pm and Sunday matinee at 1.30pm. Tickets range from £10 – £22. Check website for full performance times or to book,  go to: