Mr Small, along with Jim Shaw President of Irish Football association, Chairman of Down District Council Cllr Billy Walker, and Ards Borough Cllr Robert Adair who is Chair of Down Rural Area Partnership’s (DRAP’s) Local Action Group, attended the official opening at Killyleagh Showgrounds and were impressed at the facilities on offer to the local community. 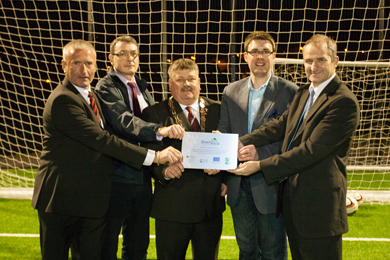 Speaking at the event Mr Small said: ‘I want to congratulate Killyleagh Football Club on completion of this successful project. It is very satisfying to see the positive outcomes of Rural Development funding, available from my Department and delivered through the Down Rural Area Partnership (DRAP) Local Action Group and Joint Council Committee. I want to also acknowledge the significant contribution made by Down District Council and the NIHE towards this project”

Killyleagh Football Club received nearly £90,000 of grant aid from NI Rural Development Programme 2007-2013 through Axis 3, Measure 3.4 Basic Services for the Rural Population, and was delivered by DRAP. This training pitch will be used by a range of groups within the local area. At the moment there no other facilities within Killyleagh which provide the type of space proposed under this project.

Speaking at the event, Cllr Robert Adair from Down Rural Area Partnership, added: “The new pitch is state of the art and a fantastic resource, and for the wider community, development of rugby, football and other sports both recreationally and competitively in the region. It is a much needed sports facility in the rural Killyleagh area, and I have no doubt it will be used extensively by the wider community. 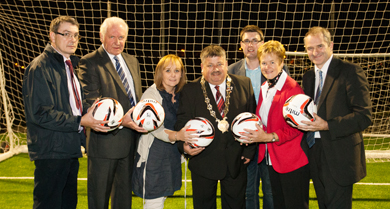 “I would like to take this opportunity, on behalf of Down Rural Area Partnership, to thank all those involved for their dedication and hard work – this fantastic new facility would not have happened without them. It will not only provide a fantastic sporting facility in the area, but also increase the overall attractiveness of the region, and contribute to improving the health and wellbeing of the area.”

Valerie Heron Killyleagh Football Club Treasurer, said: “This is an exciting time for the Club, we are delighted to have received the much needed funding to develop a top-class sports facility for Killyleagh and I look forward to many a good games played here.

“We spent almost three tears working at this application and in the end all the hard work has paid off. Now we will be able to provide playing space for our U-8’s and U-10’s and the older teams will benefit from the 50×40 feet pitch as a training space. It will be perfect too for running tournaments.

“Our ladies team too will train here and we hope to set up a girls soccer team soon. Use of the pitch is open to all groups in the Killyleagh area and beyond and we have even had interest from the Referee’s Association for their training sessions.

“Around five years ago we did look at developing the ground adjacent to the front gate but that was on a flood plain and we could only develop this pitch on higher ground. We are delighted with the results and this will be a tremendous boost to our club.

“Of anyone wishes to book the pitch, they just have to log on to our website fro details.”

The Funds were awarded under Measure 3.4: Basic Service for the Economy and Rural Population

The Rural Development Programme 2007-2013 is part financed by the European Agricultural Fund for Rural Development (EAFRD) and the Department of Agriculture and Rural Development (DARD); Down Rural Area Partnership had an allocation of £13.5 million. The current Northern Ireland Rural Development Programme is worth over £500million to the rural economy and is implemented across four axes. Axis 3 is delivered using the (LEADER) local model and made up of seven clusters Down Rural Area Partnership (covering Ards, Banbridge, Down and North Down Council areas). Funding was available under six measures including: diversification, business creation, tourism, basic service for the economy and rural population, village renewal and development and conservations and upgrading of rural heritage.