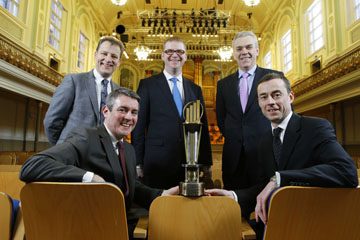 In the Ulster Hall at the launch were Simon Hamilton MLA, back centre, with Jeremy Fitch, Invest NI, Brian McErlain, Genesis Bakery and 2012 Entrepreneur of the Year finalist. Front row, Frank O’Keefe and Rob Herron, Ernst and Young NI Partners.[/caption] “I am confident that this year’s programme will include more than its fair share of entrepreneurs from Northern Ireland if the evidence that I see even in firms in my own constituency is anything to go by.  Businesses like Willowbrook Foods in Killinchy in my Strangford constituency which was one of your finalists last year. I am constantly impressed by how companies big and small refuse to be bowed by this recession but instead choose to take a risk in these tough times and develop new products and enter new markets and I am certain that there are other entrepreneurs in the Strangford area capable of competing in this competition and I would encourage them to enter. “The Northern Ireland Executive is clearly committed to growing the size of the economy in Northern Ireland and at the core of that strategy is establishing an environment in which entrepreneurs are encouraged and can flourish.  We know that we’ve suffered from comparatively low levels of entrepreneurship in Northern Ireland but that weakness must be overcome and we are taking positive steps to put entrepreneurship and innovation at the centre of our economic future.” Mr Hamiltyon said the Economic Strategy included key innovation and research and development targets such as supporting £300m investment in R&D, with at least 20% from SMEs, supporting 500 businesses to undertake R&D for the first time and secure 120 Collaborative Projects in R&D and supporting our Universities to establish 8 spin-out companies by 2013. He added: “This proposes to build upon existing successes like supporting an unprecedented 52% rise in total R&D expenditure since 2008, rising to £521m which is the highest figure on record and establishing a Creative Industries Innovation Fund which has made awards to date totalling £3.7m to 134 business projects and 22 sectoral body projects. “Without individuals ready to take a risk on a new idea.  Without people prepared to employ others with the talent and skills to take their ideas to the next level.  Then we simply won’t build the new businesses or create the jobs or stimulate the sort of growth we need to not only lift us out of the recession but also to build the private sector orientated, knowledge focused economy Northern Ireland needs. “When the Ulster Hall first opened its doors in 1859, Belfast was progressing along the path to becoming the industrial powerhouse in Ireland.  Within a few years, a city with no natural resources of its own was home to a shipyard that built boats that sailed the world. Decades later, Shorts aircraft factory constructed planes that won a world war.  The portable defibrillator, the pneumatic tyre, the ejector seat, were all invented and made here. “We have an inherent spirit of innovation and entrepreneurship in this part of the world. Innovation and entrepreneurship is in our DNA and we just need to tap into it and I am in no doubt that events like Ernst & Young’s Entrepreneur of the Year programme will highlight and encourage for everyone to see that entrepreneurship is alive and well in Northern Ireland”.]]>