<![CDATA[ <p style="text-align: justify;">THE perennial issue of dog fouling was raised at a meeting of the Down District Council Environment Committee yesterday. But preceding this issue, another item on the agenda on litter on local trunk roads also raised a few eyebrows and was in part linked to the dog fouling one.

Following a report by a council officer, councillors were left with looking at what options they could take to continue their campaign against this major blight of dog fouling on our environment and a threat to our health. 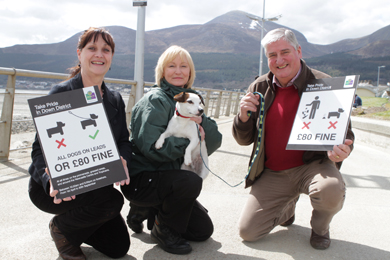 Councillors Carmel O’Boyle and Eamon O’Neill with Down District Council dog warden Eleanor McCartney have launched the new rules about looking after your dog on Newcastle promenade and beaches.[/caption]

Chairing the meeting, Councillor Eamonn O’Neil welcomed the report and indicated that “We need now be be engaging with the people. All councillors are faced with complaints about this constantly. Most people are very good and do clean up after their dogs but there are still some who don’t and this is a running problem. This is a serious problem and we need to take action on it.

Councillor Eamonn Mac Con Midhe said: “We need to get the message out that we are serious about dealing with this issue. Belfast City Council are having a strong media campaign including on TV to address this. I understand that we have a budget of almost £10,00o that we could use for this and it should be used.”

The call for a publicity campaign was supported by Councillor Billy Walker who added: “I totally agree. This has to be stopped. What we could do is get the Council to write a letter to the owner of the offending dog if reported as a warning shot. It may have the effect of stopping this behaviour. Why can’t we name and shame them publicly in the media.”

A Council officer explained that a fixed penalty notice given to someone for their dog fouling a public place was only a notice in lieu of a court action and that the Council could not on that basis ‘name and shame’.

Councillor Garth Craig said: “Prevention is better than cure. If we can’t afford more wardens as we have no budget for this then we will have to look at getting our local councillors and people involved in more community engagement. We could create a roadshow and take it round the local communities. We just need to make the public more aware of the issues and let then know that they can report offending dog owners for letting their dogs foul.”

Councillor Terry Andrews said: “We need to educate the public more on this. That may mean going to schools and youth clubs. To get the message home too we may have to take a more legal approach with offenders.

A leaflet “Dogs You and the Law’ can be got at Down District Council. The Fouling of Land by Dogs (Down District) Order 2012 applies to the whole area and makes it an offence to permit a dog to foul and to not clean up after it. This order applies to land open to the air to which the public have access to. This could include, roads, parks, beaches, playing fields etc.

The litter on the trunk roads was also discussed and the issue was raised by Councillor carmel O’Boyle in relation to the state of roads around Newcastle. Canice O’Rourke, Environmnet Department Director explained that because of the severe  weather, staff sickness and lack of resources it had been difficult to prioritise this matter but it was now being addressed.

Councillor Robert Burgess said that Newcastle roads were badly littered and added: “The A7 too is a mess with litter especially in the Crossgar area. There are lots of hot food papers and cans and bottles. One of the effects of this is that cattle actually swallow plastic bottles thrown into fields and something has to be done to stop this as losing cattle is a major blow to any farmer.” 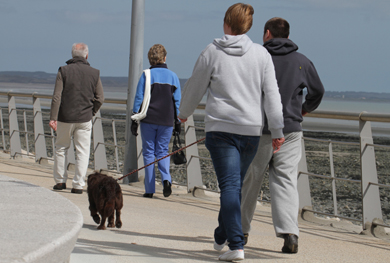 New Bye-Laws: Dogs must be on leads in Newcastle promenade and beaches and owners must clean up dog fouling.[/caption]

Councillor Eamonn O’Neil said it was an old problem in that “Someone would have to go to court and act as a witness but people were reluctant to do so. People need to complain and follow through. This is an important issue.”

A council officer explained that the person throwing away the litter had to be witnessed in the act of doing this otherwise it would not be sufficient to back up a prosecution.

However, Councillor Billy Walker advocated more street sweepers to be employed on the ground. He said: “The state of our roads is a shame and a disgrace. We need to discourage people from doing this. We do need a couple of  cleansing assistants out on the roads getting on top of the litter. I would urge Council to employ more solo sweepers. There were three but this was reduced to one.

“They do clean up the dog dirt and this is important in all of our towns and villages. It just piles up if left. Councillors need to see this as a front line service. I have had many people telling me they don’t mind paying a few pence on the rates to get this done. All of our communities should be clean and tidy.

“I have seen the work the solo sweepers do and it is very impressive when they take a pride in their communities. That way we can start to address the physical problem of dog fouling directly. But the wardens etc will still need to be active. This is a win-win situation if we do it correctly. then  Everyone will be happy.”

Newcastle Problems in the Spotlight

Due to the extent of the littering/dog fouling problem and associated costs for clearing up, which are carried by every ratepayer, Down District Council acted under powers introduced in the Clean Neighbourhoods and Environment Act (Northern Ireland) 2011 to introduce three new pieces of local legislation called Dog Control Orders, which come into force on 1st June 2013, and to increase the fixed penalty for litter/dumping. You will notice, in the forthcoming weeks, new signs being erected by Council in the towns around the District warning against depositing litter, and not cleaning up after a dog fouls, with an £80 fixed penalty if detected.

Environmental Services Committee Chairman, Councillor Eamonn O’Neill said: “Down District has some of the most beautiful scenery in the country and is proud to show it off, not only to its own residents, but particularly to visitors from far and near. This year with so many big events planned for the area a large number of visitors are expected to come into the District and the Council, on behalf of the residents, wants to show it off to its best advantage.

“However hard Council tries a significant number of people still seem to have no regard for the environment or their fellow citizens and continue to litter, dump and allow their dogs to foul indiscriminately. That is why Down District Council is saying to everyone Take Pride in Down District. I recognise that the majority of dog owners are responsible and I would like to thank them for the efforts they make to comply with the law.”

The first of these Dog Control Orders, The Fouling of Land by Dogs (Down District) Order 2012, applies to all land in the District which the public has access to with or without payment. It consolidates the existing offence of permitting a dog to foul and to not clean up.

The other Orders, which relate to dogs on leads, are intended to protect both members of the public and dog owners alike from the consequences of a perceived or actual dog attack. The requirement will also have the added benefit for dog owners of being aware of where their pets are at all times and so lessen the possibility of their dog fouling without them noticing it thereby risking a fine. These Orders are:

The Dogs on Leads Newcastle (Down District) Order 2012, which applies to the Downs Road Car Park, the Newcastle Promenade, including adjoining grassed areas, and to the area within the curtilage of the Newcastle Centre and the Tropicana facility, requires that dogs be kept on leads at all times whilst in those areas.

Councillor O’Neill added: “Also, the Dogs on Leads Newcastle Seashore (Down District) Order 2012, requires owners to keep their dogs on leads whilst on the seashore, between the hours of 10.00 o’clock in the morning and 6.00 o’clock in the evening during the period between 1st April and 30 September each year.

The Fixed Penalty for breaches of all of these Orders has also been set at £80 (£50 for early payment)  and between now and 1 June, officers who detect such an offence on the Newcastle Promenade or Seashore will be advising dog owners of their responsibilities under these Orders and the consequences of breaching them. However from 1 June onwards the Orders will come into force and fixed penalties will be issued, without exception, on detection of an offence!

Councillor Carmel O’Boyle said: “Other forms of littering/dumping are also blighting the District, costing the ratepayer money for cleaning up, and that is why Council has also used its powers under the Clean Neighbourhoods and Environment Act (Northern Ireland) 2011 to increase the Littering Fixed Penalty to £80. The increased fine has been in place since last year and if Council prosecutes anyone for littering, it is a criminal offence and the offender will have a criminal record if found guilty.”

She added: “Council is asking everyone to consider the consequences and costs of their actions before discarding litter, be it a cigarette end, hot food wrappings or other material, or not cleaning up after their dog. All this waste has to be lifted, at a cost, which could be better spent on improving our area for all its residents and visitors. So please, either place your waste in a litter bin or take it home to your own bin, and bag and bin dog waste. It takes very little effort and saves a lot of money.”

So…. as the clean up is on its way…. every citizen in the  district will be asked not what Down can do for you, but what you can do for Down!

We need to increase our civic pride and let tourists and visitors and ourselves see that Down and the Mournes is a place worthy of visiting and living in and one we  would all recommend.