<![CDATA[ <p style="text-align: justify;">A body of political representatives and peers from North and South or Ireland, and former Irish Taoiseach John Bruton attended a high level reception in Westminster about the path ahead for peace in North Ireland.

The briefing ‘Investing in peace is less expensive than paying for conflict’ was on behalf of Co-operation Ireland, the leading peace-building charity on the island of Ireland.  The lunchtime reception was hosted by South Down MP Margaret Ritchie and DUP Lagan Valley representative Jeffrey Donaldson MP. 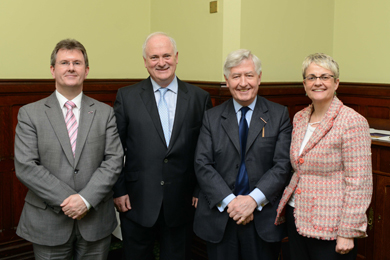 In a keynote address Mr. Christopher Moran, Co-operation Ireland’s Chairman said: “The message is clear. We must invest in communities and peace or we will pay in conflict. That means delivering on a shared future, not just with political agreement, but with political will and action.

“Co-operation Ireland is proud of its record in building relationships, but there are those bent on violence and agitation who continue to sow discord, particularly in marginalized communities. Dissident republicans remain active and potent, and in recent months we have seen unrest and fracturing within loyalist communities.“

Also addressing the event, John Bruton, who served as Taoiseach between 1994 and 1997 said: “The contribution of Co-operation Ireland to peace and reconciliation on the island should not be underestimated, be that its many grassroots cross-community programmes or its role in promoting Anglo-Irish relationships.”

MPs, peers and senior members of the diplomatic corps learned about Co-operation Ireland’s work creating opportunities for groups from the two main religious and political communities in Northern Ireland, and from both sides of the border, to learn about each other’s traditions and cultural backgrounds.

The audience also heard about Co-operation Ireland’s work at the fore of strengthening relationships between Great Britain and Ireland through its joint patronage by Her Majesty The Queen and the President of Ireland.  This culminated in the landmark visit of The Queen to Ireland in May 2011 and the historic handshake between Her Majesty and Martin McGuinness, Northern Ireland’s deputy First Minister in June last year.

Concluding his remarks, Mr. Moran said: “As the first ceasefire generation reaches its eighteenth birthday and maturity we must ensure that the political landscape does not ensnare them in the mistakes of the past.

“We were pleased with the opportunity to deliver this message in to key influencers at Westminster today and thank both Margaret Ritchie MP  and Jeffrey Donaldson MP for their support.”

Co-operation Ireland is the leading peace-building charity on the island of Ireland. Their mission is to ‘advance mutual understanding and respect by promoting practical co-operation between the people of Northern Ireland and of the Republic of Ireland’.