<![CDATA[ <p style="text-align: justify;">THE Northern Ireland Environment Agency  has dealt with another abandoned trailer that has leaked laundered fuel.  This time the trailer was abandoned at Loughbrickland.

An environmental pollution incident has been prevented by the NIEA who quick to deal with the trailer loaded with fuel processing waste. 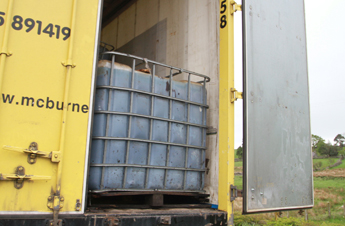 A Senior Water Quality Inspector swiftly visited the scene last night on being made aware of the incident. It is estimated that the trailer, parked in a lay-by adjacent to Loughbrickland Lake, a popular trout fishery, contained a significant quantity of diesel laundering waste.

There was a minor leakage of liquid waste from within the trailer at that time and the NIEA Inspector deployed pollution prevention measures to absorb the leakage and prevent it from impacting on the local waterway.

NIEA have now removed the trailer and waste under its Flytipping Pilot Scheme.

Environment Minister Alex Attwood said: “I commend the swift work of the NIEA in dealing with this incident. There is no doubt that a worse outcome could have resulted here, especially given the trailer’s proximity to Loughbrickland Lake. I also thank the Roads Service for preventing any of the waste migrating from the lay-by to the adjacent road.

“This is the second such incident in a matter of days, following on from an abandoned trailer leaking laundered fuel in Castlewellan at the weekend, which the NIEA also quickly dealt with.

“Everybody should do everything in their power to isolate and help the authorities deal with the fuel laundering gangs and the organised crime they represent.”

Anyone with information on those involved in dumping this type of waste should contact Crimestoppers on 0800 555 111 or the Water Pollution Hotline on 0800 807 060. Calls will be treated anonymously.