<![CDATA[ <p style="text-align: justify;">Newry Mourne and Down District Council has decided following a debated motion on Monday evening at a full council meeting that it will not apply for borough status. The motion failed to carry a required two thirds majority, and fell on 20 voting for and 16 against.

Basically, borough status, which is approved by Her Majesty the Queen, confers the right to appoint a mayor and deputy mayor, use the status of borough, and allows for a certain amount of ceremonial activity such as wearing robes.

Councillor Henry Reilly proposed that the council move to borough status, however, a strong contest from Sinn Féin supported by the group of five independents meant the proposal would not succeed.

Sinn Fein’s Terry Harty argued that ‘no action’ be taken on the proposal and said: “The main priority for us is to extend out to County Louth and develop our tourism industry. After all, what is a borough, a city, an urban sprawl? It doesn’t tie in with the wider area.” 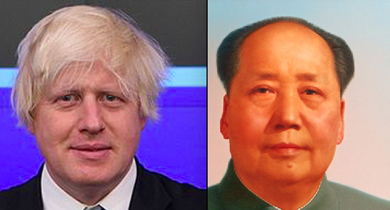 The council debate touched on the perceived role of ‘chairmen’ and ‘mayor’. Down News has put two heads together from the political spectrum to show Boris Johnston as Mayor of London who does not appear to engage in ceremonial dressing up, and Mao Tze Tung who has tainted the American conception of ‘chairman’.[/caption]

Councillor William Walker responded t0 Cllr Harty’s ‘no acion’ proposal and said: “I am disappointed that I have heard Terry Harty mention County Louth on a number of occasions. Basically, this motion is about our Council in our county and we have to see it like this. We need to move forward. It appears that this decision to request borough status would require royal assent and that is what Sinn Féin are really sticking with.

“The Deputy First Minister Martin McGuinness shook the Queen’s hand in Dublin in friendship. That was a symbolic and historic shift in attitudes. Sinn Féin need to move on.”

Cllr Patrick Brown said after the debate: “I voted against the decision to apply for Borough status as I do not feel it has any relevance or benefit to a modern, progressive council. The status would not have meant robing Aldermen, but I still do not see the merit of elevating one of our councillors to the rank of Mayor, either for symbolic reasons, or equally abstract notions that it will bring economic development to the district.

“There is no relation between having a Mayor and attracting business to South Down. We will only do that through entrepreneurial spirit, good infrastructure and a skilled workforce. The Council should reflect the people, not seek titles to distance itself from them. I am glad I voted against a proposal that would have likely done no more than assuage a few councillors.”

SDLP Group Leader Colin McGrath has said he cannot understand why Sinn Fein would deny the people of Newry, Mourne & Down Council a Mayor.

Following last night’s council meeting, Cllr McGrath said, “The civic position of Mayor is internationally recognised, be you in America, Asia, Australia, Europe or Africa. People know what the term means, appreciate that the person is a figurehead for an area and understand that they are approachable on tourism, economic and cultural matters within an area. For Sinn Fein to water this position down to Chairman and prevent the people of Newry, Mourne & Down from having a Mayor is confusing.

“There have been extensive discussions in council to iron out the finer details, and broad agreement amongst the bigger parties that we would not incorporate the term ‘borough’ into our title, that we will not appoint Aldermen and we won’t be purchasing any ceremonial robes. The only impact this decision would have is to enable us to legitimately have the position of Mayor.

“This also represents a u-turn of sorts as Sinn Fein had no issue last year when the council proposed and seconded and agreed the minutes of the committee which made this decision – with a Sinn Fein councillor proposing and another seconding the minutes.

“This is political point scoring at a particularly amateurish level. No one in Newry, Mourne & Down Council area thinks that by adopting ‘borough’ status to provide a Mayor is in any way enhancing their support for the monarchy. At a time when Sinn Fein holds the position of Mayor in Derry, Belfast and Cork it makes this move deeply hypocritical.

“Having a Mayor makes sound economic and governance sense and for Sinn Fein to prevent this shows how sometimes their principles prevent them for doing what is right for the community – a very dangerous place for a political party to be in.”

Councillor David Taylor (UUP) said he was disappointed and shocked at the Sinn Féin and Alliance position. He added: “All boroughs in Northern Ireland have said that they benefitted from achieving borough status and that it had helped their local economies. But fundamentally we don’t have to use the title of borough if we so chose. That is optional. It will benefit our district.”

Cllr Henry Reilly explained that he believed that the proposal would improve the image of the Council. He said: “It is contradictory to oppose the motion. Even Independent Cllr David Hyland agreed to sign a letter to the Queen at an earlier meeting in the Council on this matter.

“In America, the word ‘chairman’ is often associated with the communist party. For that reason in promoting good relation I would have supported the option to chose the mayoral status. We have to consider how other people perceive us in this matter. Sinn Féin said they only want ‘council’ status and this will ultimately inflict damage on the Council.”

Cllr Hyland (Independent) responded by saying: “It all seems down to one word… mayor. It will really not make a bit of difference.

“We should be discussing real issues in this chamber such as the cuts to the A&E service at Daisy Hill Hospital from 8pm to next morning.” The Independent grouping on the Council voted against the motion thus preventing it from reaching a two thirds majority for it to succeed.

SDLP  Says Debate Should Be About Economic Benefits To Council Area

Cllr Declan McAteer (SDLP) argued that the issue should be discussed in terms of economic benefits to the area. “It is about presenting our area to the world. And Cllr Michael Carr added: “We need to be looking at the enormous economic advantages of borough status. I just get the feeling we are about to make a monumental mistake.”

Cllr Gary Stokes clarified that the Council did not have to use the borough status as a title, nor did it require the councillors to be called aldermen (or women), and it did not have to involve wearing robes.

He repeated that the title ‘mayor’ was an internationally recognised term from New York to Moscow. “This is about our young people, the future of our district, jobs and tourism, and we should just go with the ‘mayor’ in the borough status. But I recognise that Sinn Féin has a veto tonight.”

So, the councillors have voted to reject the idea of Newry Mourne and Down Council adopting borough status. But only time will tell if  Councillor Michael Carr’s words about making a ‘monumental mistake” will come back to haunt the council.

Crumlin Star Too Strong For Celtic Bhoys In Junior Shield