<![CDATA[ <p style="text-align: justify;">TOURISM Minister Arlene Foster today has launched a Lighthouse Tourism Trail for Northern Ireland and the iconic St John’s Point Lighthouse will be included in the intinerary.

The Lighthouse Trail launched at Blackhead Lighthouse in County Antrim on 4 September, is being supported with £2.2million of financial assistance from the European Union’s INTERREG IVA Programme, managed by the Special EU Programmes Body (SEUPB). 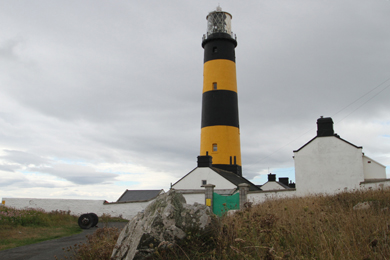 St John’s Lighthouse at Killough will be included in the new lighthouse trail.[/caption]

The first phase of the project involves three lighthouse properties in Northern Ireland － St John’s Point in County Down, Rathlin West Lighthouse, Rathlin Island; and Blackhead Lighthouse, Co. Antrim, as well as two in the Republic of Ireland.

Vice-Chairman of Down District Council and Downpatrick area Councillor Gareth Sharvin has welcomed the recent launch of the Lighthouse Tourism trail by Minister Foster.

Councillor Sharvin said: “This is great news for promoting our lighthouses and local tourism across the North and South of Ireland. The first phase of the project involves three lighthouse properties in Northern Ireland and two further in the Republic of Ireland including St.John’s Point Lighthouse within Down District.

“The lighthouse at St John’s Point in Co Down is the oldest of the three and its foundation stone was laid by the Marquis of Downshire. It  was established in 1844, but its height was later increased to 102ft. The keepers were withdrawn in 1981 and a part-time attendant appointed.

“It is therefore excellent news to hear that St. John’s Point Lighthouse has been included in the first phase of the project. It will bring a great boost to the local economy of Killough and surrounding areas. The trail is not only improving the visualisation of the lighthouses, it will also see the installation of visitor centres and up to eight luxury self-catering accommodation units within current disused light keeper cottages across the project.”

Councillor Sharvin added: “The scenery and history around St. John’s Point Lighthouse is one that everyone must explore and enjoy. The Lighthouse Tourism Trail will preserve an important part of our cultural heritage, and also create a lasting legacy that will attract both domestic and overseas visitors for many years to come.”

Emphasising the importance of support for initiatives that seek to enhance local tourism infrastructure, Minister Arlene Foster said: “Many of our local lighthouses are historic and beautiful buildings that play an important role in coastal navigation. Not only do they stand tall as reminders of our proud maritime history but they also offer significant tourism potential.”

Speaking after a tour of the lightkeeper’s house in Whitehead, the Minister added: “Blackhead Lighthouse guided many great ships on their journey, none more famous than the Titanic. The self-catering cottages have been fully restored to their former glory and they offer visitors a magical windswept retreat with a difference.

“The lighthouse keeper’s house is attached to the lighthouse by a short walkway and there are also a variety of coastal walks for visitors to enjoy. Whitehead is an ideal place for visitors to start a trip along the Antrim Coast and it is also within easy access of Carrickfergus and Belfast.”

Welcoming the project Pat Colgan, Chief Executive of the Special EU Programmes Body said: “This is an important tourism initiative, which has the potential to create long-term economic and employment opportunities for local communities, on a cross-border basis. The initiative represents a niche form of rural tourism that will help broaden out the tourism season of the entire region. In helping to preserve an important part of our cultural heritage, the project will also create a lasting legacy that will attract both domestic and overseas visitors for many years to come.”

Yvonne Shields, Chief Executive of the Commissioners for Irish Lights added: “Lighthouses by their very nature are connecting points between land and sea. They continue to play a very important role in the provision of our maritime safety services. This project has huge potential because in addition to maritime safety services it allows CIL to capitalise on the spectacular locations of our lighthouses, harness their huge heritage value and work with local communities in an exciting and innovative way to deliver economic and tourism benefits North and South.”

October 26, 2020
We use cookies to ensure that we give you the best experience on our website. If you continue to use this site we will assume that you are happy with it.Ok