<![CDATA[<span class="Apple-style-span" style="font-size: medium;">Police in Downpatrick presented £1110 recently to Down Special Olympics.   The money was raised as a result of a sponsored cycle which the Downpatrick Neighbourhood Policing Team and Special Olympics athletes took part in it.  The cycle took place in October last year and was a 30 mile round trip from Downpatrick to Strangford, on to Kilclief, Ballyhornan, Ardglass, and Killough to Bright and back to Downpatrick.  The route encompassed most of the Downpatrick Neighbourhood Policing Team area.  The funds will be vital in helping the club pay for transport costs to allow them to compete with other groups which will hopefully help them earn a place in the next Special Olympics Ireland team. [caption id="attachment_40278" align="aligncenter" width="540"] 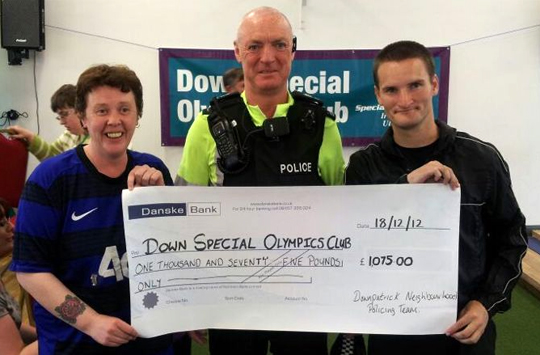