<![CDATA[ <p style="text-align: justify;" align="center">Sinn Féin Councillor Willie Clarke has said he is extremely concerned by a delay in the clean up process at the scene of a sewage incident at the Castlewellan Road, Newcastle. 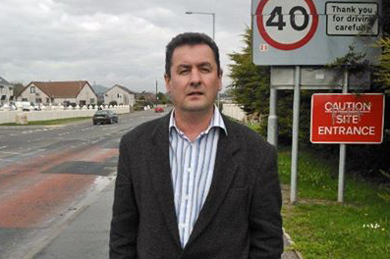 Councillor Clarke said: “On Friday morning  raw sewage was spilling down the Castlewellan Road and a terrible stench enveloped the entire area adjacent to Sally Gardens and Burren Meadows areas. After being contacted about the problem by local residents, I immediately got in contact with NI Water and within a short period of time contractors had arrived but could not clear the blockage or cleanse the area until a NI Water official travelling from Armagh confirmed that the incident was a sewage spill. During this period, I had to stop residents walking through the raw sewage on the footpath.

“This has been a serious failure in the sewage system with distressing and unpleasant consequences. That local residents were forced to endure this for longer than they should have is unacceptable. I will be seeking answers about the reasons for the delay.

“The initial response from NI Water was exceptional, but not allowing a contractor to cleanse an area until it has been confirmed as sewage is not acceptable. We live in an era of sharing information by mobile technology, surely it would be more practical to send a photograph of the contaminated site. Recognising that this is not a pleasant job I think that a word of thanks is due for a good job well done by the contractor.”

Domestic Rates Bills Are On Their Way Now