<![CDATA[ <p style="text-align: justify;" align="center">THE sword still hovers over the future of Burrenreagh Primary School near Castlewellan as the Department of Education’s consultation process is running. It is an anxious time for parents, pupils and staff and the Board of Governors itself.

In support of the school’s position, South Down MLA Seán Rogers (SDLP) has sponsored St Patrick’s Primary School, Burrenreagh, on a trip to Parliament Buildings, Stormont. 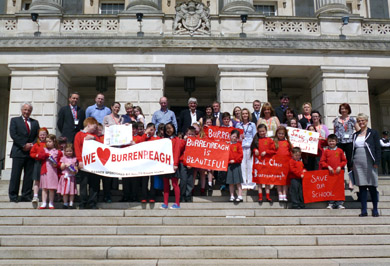 Mr Rogers said: “I invited pupils, parents, staff and members of the Board of Governors to Stormont.  The pupils had a tour of the building and engaged with Stormont’s Educational Services department.  Members of the Assembly’s Education Committee attended the luncheon event and heard from the Principal, Chair of the Board of Governors, parents and teachers who all put forward a very compelling case for the school to remain open. I was encouraged to see the presence of other elected representatives at the event and look forward to their support in the weeks and months ahead. “

Speaking at the event Mr Rogers said: “This is a school which is the hub of the rural community. It has excellent leadership from the Principal and Board of Governors which filters down to members of the teaching and non-teaching staff. The extra-curricular activities that are offered at this school are second to none and would rival any larger school across the North.

“The pupils even benefit from Shimna College’s Shared Languages project with all pupils learning Spanish. The school itself opens at 8am and runs until 6 pm with a Breakfast/Homework/Arts and Crafts Club offered.  From speaking to working parents and prospective parents, this is a huge attraction which is reflected in the recent additions to the school and the registered interest in the school for the years ahead.  This is also a school which, even in these times of austerity, is operating within budget.

“The Minister has said previously that this is not a numbers game – if that is not the case then this school must remain open.  At the conclusion of the event pupils entertained those present with Burrenreagh’s own version of One Directions – “What makes Burrenreagh Beautiful”.  I was delighted to have hosted this event in Stormont and I will continue to fight for this school as I believe it to be an essential part of the rural fabric of the Bryansford area.”

Later that day Seán Rogers was part of an SDLP delegation with South Down MP Margaret Ritchie which meet with the CCMS.  At this meeting St Patrick’s, Burrenreagh and Clontifleece Primary were discussed in depth and two strong cases was put forward for the retention of both individual schools given the contribution both make to community life in each area.

Ms Ritchie added:  “This primary school is fully woven into the fabric of the Burrenreagh community and its continued existence is vital to ensure the preservation of its identity. The School continues to provide good educational outcomes and is financially viable, and the SDLP will continue to strongly support this campaign for the school to remain open.

“I am pleased that the SDLP was able to hold this meeting with the CCMS to outline our strong opposition to the proposed closure, and this opposition is also palpable in the local community.”