<![CDATA[ <p style="text-align: justify;">A row has broken out over water meters between the SDLP and Sinn Féin.

South Down MLA Séan Rogers (SDLP) has attacked Sinn Féin “hypocrisy” citing a Sinn Féin Minister’s department installing 32,000 water meters in the North whilst the party joins in with protests against water meter installations in the South. 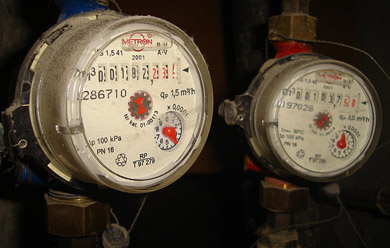 A row has errupted between the SDLP and Sinn Féin over the policy of charging for water and using water meters.[/caption]

Mr Rogers indicated that he has discovered that during Conor Murphy’s tenure as Regional Development Minister, his department installed over 32,000 domestic and non-domestic water meters across the north.

Mr Rogers said: “Whilst the answer to my question is not all that it might have been it nevertheless has a number of very revealing factors.

“The Department of Regional Development has advised that between 2007 and 2014 some 32,000 meters have been installed at domestic properties. The revelations will make uncomfortable reading especially for the underprivileged families in our society. Sinn Fein followers will be most uncomfortable of all when they learn the fact that a total of 26,510 meters have been installed at family homes during Minister Conor Murphy’s watch.

“Indeed, in 2008, a year after Conor Murphy had been installed as DRD Minister, his department installed almost 12,000 water meters at domestic properties, almost triple the amount of the average.

“I contend that it is the utmost in hypocrisy to be seen joining in the water charge protests in the Republic whilst supervising the installation of water meters in this part of Ireland.

“I will also be making demands of Regional Development Minister Danny Kennedy to assure that he does not continue the installation process which his predecessor Conor Murphy allowed to go unchallenged.”

Mr Rogers has asked the Minister for Regional how many domestic; and non-domestic water meters were installed in South Down between May 2007 and May 2011; and May 2011 and December 2014.

NI Water does not hold information about meter installations according to constituency boundary lines and therefore cannot be provided for the area requested.

It is understood there are approximately 113,000 water meters in Northern Ireland, of which some 32,000 have been installed at domestic properties.”

Commenting on the attack on Conor Murphy MP and Sinn Féin by Séan Rogers, SDLP MLA, the Newry and Armagh MLA Mickey Brady said: “This latest anti-Sinn Féin outburst by the SDLP via Mr Rogers’ makes you wonder just what planet he has been living on.

“My Party colleague Gerry Kelly MLA secured a commitment from the DRD Minister Danny Kennedy last November that he would look again at the installation of water meters in new builds to comply with legislation and the EU Water Framework Directive.

“British direct rule ministers introduced legislation in 2006 requiring NI Water – the public utility in the North – to fit water meters in homes in preparation for their plans to introduce water charges.

“When Conor Murphy became DRD minister in 2007, he stopped water charges, the further privatisation of water services and the introduction of universal household metering in 2007/8.

“However, Conor Murphy required cross-party support to amend the 2006 legislation on metering.

“There were parties opposed to any change in the structure of NI Water including the SDLP which prevented Conor Murphy’s proposals going forward when presented at the Assembly Regional Development Committee.

“While there was a statutory provision on the department to install meters in new build homes the reality is that these meters have never been read and domestic users have paid no water charges.

“It is our hope that Danny Kennedy will get the necessary cross-party support to end the installation of water meters in new builds.

“He will certainly enjoy Sinn Féın’s support on this and Seán Rogers might be better employed working to ensure his own party’s support for an end to metering.

“Sinn Féin stopped water charges in the North and will do so in the South if the coalition government fails to listen to citizens.”