<![CDATA[ <p style="text-align: justify;">NEWCASTLE Rock Pool is celebrating 80 years of summer fun this year in the glorious sunshine, but a cloud hangs over the future of the popular seaside pool as funding to keep it open is increasingly difficult to find and may eventually dry up. 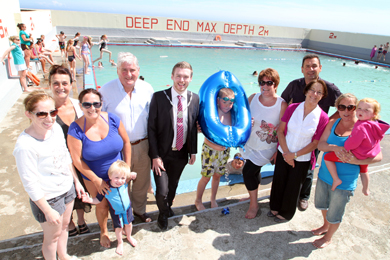 The rock pools in Warrenpoint and Bangor’s Pickie Pool have long since closed, but a strong group is now emerging in Newcastle to preserve one of the last sea pools in Ireland.

Jenni Spice of the Rock Pool group said: “There has to be a way of maintaining this project. It has made a huge contribution to Newcastle and the wider area. We are now working with local councillors to secure its sustainable future. This is the last of its kind in Ireland and it is so special to all of those families who have enjoyed using it over the past 80 years. I look forward to the next 80 years. The Newcastle Rock Pool has great potential to add to local recreation and tourism.”

Down District Council Vicechairman Councillor Gareth Sharvin, local Newcastle councillors, Rock Pool staff, members of The Friends of the Rock Pool group and local children gathered to mark this special occasion. Bolstered by the great weather, the pool has already seen record numbers of swimmers and looks set to have yet another memorable season. 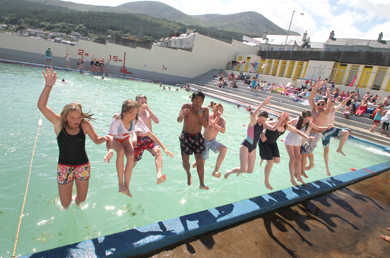 Cooling off in the Rock Poll in Newcastle during the fine weather.[/caption]

Down District Council Vice-Chairman, Councillor Gareth Sharvin said: “Newcastle Rock Pool is a community treasure and has been enjoyed by residents and visitors alike since 1933. The exceptional weather over the past few weeks has saw user numbers rise by a massive 237% which demonstrates the popularity of this hidden gem at the foot of the Mountains of Mourne.

“The pool is unique in that it is a tidal seawater pool. It has provided the opportunity for generations of families to swim in a safe and healthy environment and this year will, as before, offer lifesaving lessons for adults and children. Down District Council has worked hard to ensure the cost of a swim is kept to a minimum with children’s entry only £1.60 for a whole day and adult fees just 60p more.”

Councillor Sharvin gave a special mention to The Friends of the Rock Pool who he described as  “stalwarts of the outdoor activity centre” and mentioned that the group are in the process of planning special activities to celebrate this milestone year. 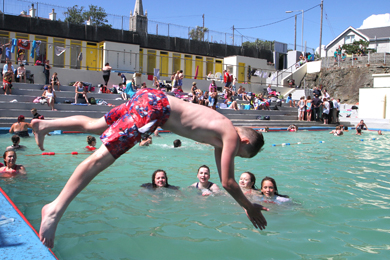 Jamie Holland takes the plunge in the Newcastle Rock Pool.[/caption]

Speaking to Down News, Kathleen Heenan explained she had taught swimming in the pool 60 years ago. She said: “I learned to swim in the Bloody Bridge River when I was young. But when the pool was built it provided a tremendous boost for local children and adults who could then learn to swim in a safe environment.

“The pool then was open from 9am to 9pm in July and August only. In those days we had high diving boards and we had even had top divers performing to good crowds. Gradually a swimming school started and Mrs McCullough who was running it invited me to join and teach. I got involved and over the years I gained my coaching and teacher’s certificates and it grew from strength to strength.

“There have been tragedies recently with young people losing their lives near water.  We taught our children how to cope with emergencies and also how to avoid them. Many people today in the Newcastle and wider area are grateful for learning these essential skills. Lifesaving is not about jumping in after someone as this can add to the tragedy.” 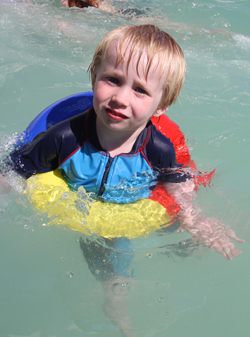 Cian Brennan (3) learning to swim in the Newcastle Rock Pool.[/caption]

Looking back to the old days at the Rock Pool, Kathleen remembered the days when they had to gather the seaweed from the bottom of the pool that had been washed over the low wall now since built up.  “The instructors, parents and anyone who could help gathered  up the seaweed and helped throw it back over the wall into the sea.

“I still swim most days of the year in the sea at Newcastle whether the sun is shining or it is snowing. A group of us brave the elements. Each Christmas there is an annual swim from the rock pool over to the harbour. The local RNLI are always on hand in case anyone gets into difficulties and many people join in.

“The Newcastle Rock Pool has provided a great service and we must do what we can to keep it open. I can remember people came from Banbridge, Rathfriland and Kilkeel to swim here. And the oldest person I taught to swim was a lady of 90 years of age. The pool has many happy memories for so many people. Long may it last.”

Also at the eighieth celebration local Newcastle councillor Eamonn O’Neill said: “This year we have seen a phenomenal increase in people using the rock pool with a 240% increase. It has proven to be a first class facility for Newcastle and our priority now is to ensure that is stays open for years to come.

“There is a good group behind it and Down District Council will give it their support.”

Councillor Eamonn O’ Neill explained that his seven children used to cycle to the pool from Castlewellan and they learned  to swim there. And Councillor Carmel O’Boyle said her three children also learned to swim in the rock pool.

Speaking after attending a photo launch at the Rock pool on Friday afternoon which was organised to launch the celebrations of the   80th anniversary  of the rock pool, in Newcastle, Councillor Willie Clarke said: “I am delighted with the progress that has been made to celebrate this significant milestone, there was a great turnout at the Rock Pool, which is reflective of the large numbers of users of the pool this season. A week of celebrations are planned in August.

“Down District Council will provide funding for the event. This is on the back of a motion proposed by myself  and seconded by Councillor O’Boyle, which requested that the Council organise an event with the Friends of the Rock Pool to recognise the contribution it has made to the heritage of Newcastle Harbour area, given this is the 80th anniversary of it first being opened to the public in June 1933.

“The Rock Pool  which  is celebrating its 80th Anniversary provides a valuable resource for people to enjoy swimming in a sea water environment with added safety; it also trains many young people in lifesaving skills.”

The Rock Pool is open, tides permitting, seven days a week, with an adult only swim on Thursday evenings from 6pm until 8pm. Details of daily openings, lessons and the special eightieth celebrations can be found on the Pool’s Facebook Page by www.facebook.com/RockPoolNewcastle