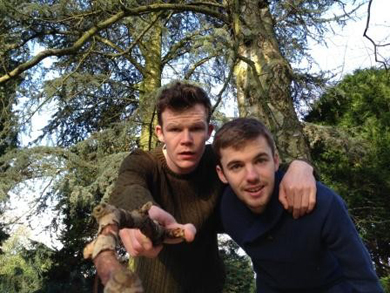 Don’t miss this great production of Mojo Mickeybo by Chatterbox at the Down Arts Centre.[/caption]

Chatterbox Productions are proud to present Owen McCafferty’s award-winning play directed by David Grant. Touring around Northern Ireland this summer, Mojo Mickybo is a vibrant and fast-paced tale of two boys growing up in Belfast in the early 1970’s—one from “up the road” the other from “over the bridge”. Their friendship centres on playing headers, spitting from cinema balconies and re-enacting Butch Cassidy and the Sundance Kid while blissfully unaware of the sectarian violence brewing around them.

A distinctive feature of the production will be the option to work with the actors after the performance in a workshop-based exploration of the play’s final scene using the image theatre techniques of Augusto Boal.

This is an opportunity for a new generation of theatre-goers to experience one of McCafferty’s most popular and successful plays and a chance for those who saw it first time round to rediscover its continuing relevance today.

“This is a glorious, vivid little play full of verbal swagger…Beneath its exuberance lies a real sadness about the blindness of sectarianism and the loss of innocence…Small but lethal” The Guardian

“You’ll find everything here, from gut wrenching grief to cackling joy” Time Out