The production of Conor McPherson’s darkly funny Faustian tale, which had its Scottish and Northern Irish premieres in February and March, won Best Ensemble Award for the all-male cast and Best Director award for Rachel O’Riordan. 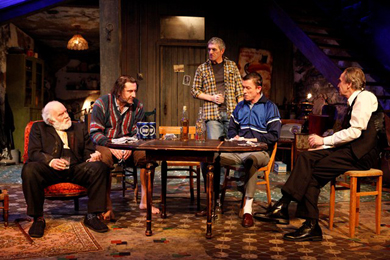 The Seafarer has picked up two major gongs for its Lyric production. [/caption]

Now in its eleventh year, the CATS celebrate the actors, directors, playwrights and other artists who have made the most thrilling contributions to the industry. Any piece of professional theatre substantially produced in Scotland in the twelve months from May to April (the natural break in the theatre year) is eligible. Around 180 new productions that opened in the year were considered for the Awards with 27 different productions making the shortlists.

The winners were announced last night (Sun 9 June) in a glittering ceremony at Edinburgh’s Traverse Theatre. The Seafarer was also nominated for Best Production – a hotly contested category which was won by Stella Quines for The List.

The judges praised The Seafarer saying: “O’Riordan bypassed any temptation to keep things merely ordinary, opting instead for a fearless approach which allowed her all-male cast to soar in what was clearly a labour of love.”

Cork-born Rachel O’Riordan has lived most of her life in Belfast and has a Phd from the University of Ulster. Rachel is Artistic Director of Perth Theatre. She is married to the actor Richard Dormer who recently impressed critics in the hit film, Good Vibrations.

Richard Croxford, Lyric Theatre Artistic Director said:  “This is wonderful news and well-deserved recognition of a fantastic production which impressed audiences in Belfast and Perth earlier this year.  We have enjoyed our first partnership with Perth Theatre enormously. To get three nominations and win two for the co-production is a staggering achievement and a terrific celebration of all the hard work put in by our highly talented teams.”