Home Home Killyleagh Take Points Against Villa
Share
Facebook
Twitter
Google+
Pinterest
WhatsApp
The NAFL – League Match.
Saturday 19th January.
Killyleagh  2  Villa  1.
A ten man Killyleagh picked up an impressive league win at The Showgrounds on Saturday.
Adam Neale struck once in each half to give Paul Sharvin’s YC a fully deserved victory after playing for more than 50 minutes with 10 men when Johnny Cheevers was sent off for high studs in a first half challenge writes Chris Hagan. 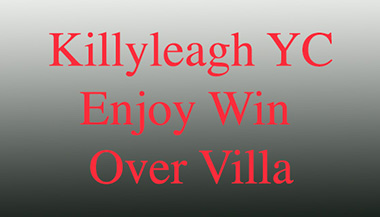 But at times it looked as if Killyleagh had the eleven men as they controlled the game for long spells and, when it was needed after a late Villa goal, they dug deep to see out the win.

After just three minutes Cheevers had the ball in the net from Jack Sharvin’s corner but the referee disallowed it for a foul elsewhere in the box. At the opposite end Macaulay Foster made a fine clearance at the back post as Michael Doran prepared to pounce.

The first shot in anger arrived after nine minutes with Neale hitting the side-netting from Ryan Blaney’s clever pass. Next up was Darren McConnell with a thunder strike from the edge of the area but it hit a Villa defender when it looked goal bound.
Killyleagh made the breakthrough with a goal of quality in the 11th minute. Blaney’s pinpoint cross was headed down by Declan McComiskey for Neale to beat Andy Wallace in the Villa goal.

The home side continued to push and Blaney was just over from Foster’s long throw and then Blaney, Jon Joe Sharvin and the impressive McComiskey combined in the 22nd minute with the cross begging for a finish.

Villa had a big, big let off in the 26th minute when Wallace completely misjudged Foster’s throw and Cheevers scooped over the bar from close range.
The visitors were always in it and lively winger Glen Stephenson hit a stanchion from a tight angle in the 28th minute before Jordan Kennedy made a crucial clearance to keep his side ahead. It was Mark Arthur’s turn next to come close for the visitors as his 40th minute shot was deflected wide.
Then came a key moment of the match as Cheevers, who has been magnificent on his return to The Showgrounds, was sent off in the 43rd minute. The ball bobbled in front of him  in the middle of the pitch and as he tried to retrieve it the referee adjudged his studs were showing as he went for the tackle.
As the second half opened, despite being down to ten men, Sharvin continued to play with three men in attack but it was no great surprise that Jonathan Busby’s Villa started to attack in numbers, and they created the first chances of the half. Adam Donnan flashed a shot wide in the 50th minute and then Carberry was quickly off his line to deny Doran.
Teenager McComiskey, despite playing so well, had to be sacrificed at this stage and Sharvin brought on the experienced Barry Treacey. Remarkably, 10-man Killyleagh then started to test Villa again.
Jack Sharvin created a chance for Neale before Killyleagh were denied by a goal line clearance when McConnell got on the end of Treacey’s cross but his header lacked direction. Just after the hour mark Treacey came within inches of making it 2-0 as he stretched to make Neale’s pass across the box.
Killyleagh were controlling the game, working harder than they have done for some time, and they got their reward in the 70th minute when Neale collected a stunning pass from Treacey and arrowed his finish into the bottom corner, despite Wallace’s brilliant attempt to keep it out.
Villa went all out to pull the game out of the fire and Doran mishit Louis Gault-Reid’s teasing cross, with Carberry gratefully accepting the shot. Then Carberry saved from Stephenson before Doran tried a snap shot from distance.
The Millisle side did pull one back in the 80th minute when substitute Gary McDermott smashed home a brilliant strike to set the scene for a grandstand finish. Killyleagh suffered a setback when midfielder Jamie Sharvin was carried off with a serious ankle injury. In the 87th minute it looked as if Villa had rescued a point with three shots in a ping-pong exchange in the box but Jordan Kennedy bravely threw his body in front of the final shot to save Killyleagh.
Next up for Killyleagh is a league game away to a revived Dunmurry Rec.
***
* A minute’s silence was observed before kick off in memory of former YC vice-president Oliver Priestly and Jean Osborne.
* The club is running a 100 club and has put out an appeal to former players in particular to rally round and support it. Anyone interested should contact Dee Heron, Barney Ross or Dawn Murray.