<![CDATA[ <p style="text-align: justify;">THE New Theatre proudly presents the Irish National Tour of James Joyce’s A Portrait of the Artist as a Young Man for one week only at the Lyric Theatre, Belfast, 18 – 22 March.

Joyce’s iconic novel is adapted for the stage by Tony Chesterman, and directed by Jimmy Fay, who is set to take up a new appointment as Executive Producer at the Lyric Theatre later this year. 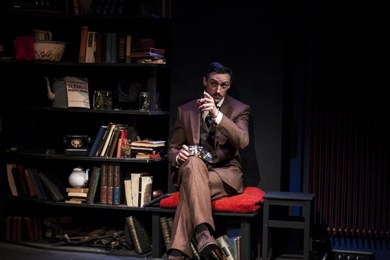 A Portrait of an Artist as a Young Man by James Joyce  will be showing at the Lyric Theatre in Belfast.[/caption]

“Joyce’s first novel is one of the most playful and provocative in the English language,” said the director Jimmy Fay. “The themes of religion, nationalism and sexuality alongside the birth of an artist’s consciousness make a heady mix and we have strived in this production to be as inventive and theatrical as possible. The production places Joyce’s writing centre stage in an attempt to make the language soar so people new to Joyce will discover his humour and veteran readers will be engaged by this production’s interpretation of it.”

The classic tale of Stephen Dedalus follows the young man during his formative years as he breaks away from the Irish Catholic conventions of his past to become an artist who will “encounter for the millionth time the reality of experience and forge in the smithy of my soul the uncreated conscience of my race.”

In the course of A Portrait which covered the first decades of his life, we see him creating his own individual aesthetic, as opposed to the dictates of the Church. He is already aware of the beginnings of new European writers such as Ibsen, and leaves Ireland to live mostly in poverty, but at liberty to seek nourishment from other cultures. The novel eventually published in 1916, contains some of the most dramatic scenes in modern literature.

The New Theatre was the first theatre in Europe to stage the sold out run of ‘Gibraltar’ after ‘Ulysses’ by James Joyce. It opened on 1 January 2011 and toured to The Irish Repertory Theatre, New York.

A Portrait of the Artist as a Young Man is also the first Irish production since the copyright was lifted on James Joyce’s work to be performed in Ireland.

Charlie Hughes (Iscariot, The Shawshank Redemption at the Gaiety Theatre)

“imaginative and graceful…Jimmy Fay’s direction of this in-house production at the New Theatre in Dublin plays a great part in the success with its quirky and highly visual approach.”  Emer  O’Kelly, Sunday Independent