<![CDATA[ <div>BROUGHT forward by one hour to the earlier starting time of 11.0am to accommodate the first ever St Patrick’s Day parade to be held on a Sunday, one would have thought that East Down Athletic Club had enough on their hands just hitting that deadline writes Joe Quinn.

But not only did it meet all the demands of the tight schedule but even managed to include a children’s series of races in the ASDA Car park commencing at the even earlier time of 9.30 am.  With three races on the card a  total of 77 boys and girls took part  and thoroughly enjoyed the experience in front of proud parents and friends.
[caption id="attachment_37208" align="alignleft" width="390"] 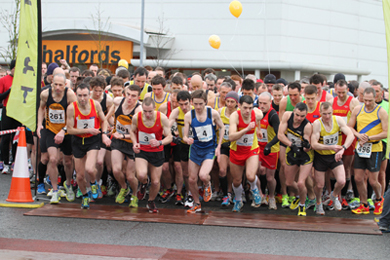 The Jimmy’s 10 gets off to a flying start.[/caption] Michael O’Connor set proceedings in motion and was the comfortable winner of the P3/4 Boys race ahead of Howie Allen and fast finishing Jamie McDowell. Anna Gardiner, Emily McKay and Niamh Fitzsimons filled the first three places in the Girls equivalent before Andrew McGrattan romped home ahead of Oran Cunningham and Cathal Kinsella in the P5/6 Boys race. This race was over 2 laps of the perimeter course and the Girls too proved no slouches as Natasha Savage showed her liking for the firmer road surface, easing home ahead of Libby Maloney and Naoise O’Hagan. The senior race for P7 and above pupils was a 3 lap affair of just over a mile and was a riveting contest between the Boys and Girls.  Chloe Galloway, looking almost as at home as she does in the water, settled in third place for the first lap and had moved up to second by the start of lap 3, stalking the long time leader Ronan Murphy for half a lap before pressing the pedal to come home a convincing overall winner. Kiara Cairns and Julie Wynn  were second and third Girls while Ronan retained his top spot among the boys ahead of Bailey Thomas and Ryan Wynn.

Adding a magic touch of the carnival atmosphere to the occasion was the new club mascot Lightning Leo who posed for photos after dispensing Lenten abstinence breaking goodies to everyone he met.  Thanks go to ASDA for the sponsorship of the goody bags provided for all participants and to their staff for the help on the day. [caption id="attachment_37209" align="alignright" width="300"] 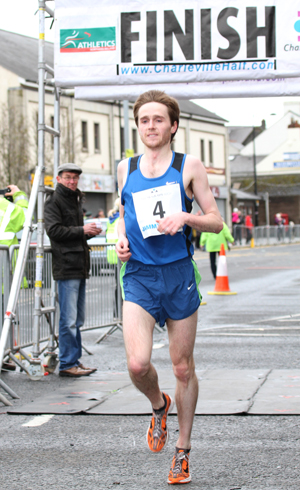 Despite the absence of former five times winner Joe McAlister, the race was not short of quality runners with Eddie McGinley taking on the challenge of the Cathedral Climb for the first time. The Annadale man was joined at the head of the field by fellow club mate and former East Down junior James O’Hare, Clonliffe’s Gary O’Hanlon and local man EDAC runner Brendan Teer as the record 650 runners left the start line and headed for the town. The day was ideal for running and the rain and snow of the previous day seemed a distant memory.  It may not be coincidence that Declan Teague our regular man in charge of the weather is presently working in Gibraltar and may have been instrumental in sending a more benign day for all to enjoy.

Thanks to the judicious use of several yard brushes by a few of the early bird Club members a few hours earlier, the pathway by the Quoile was relatively puddle free, though muddy,by he time the first running feet hit it. By which McGinley, in that unmistakable ”on the toes” style, reflecting perhaps his boxing past, was well clear and maintained a steady pace without coming under pressure to cross the line in 31.01, over half a minute clear of O’Hanlon with O’Hare a mere 3 seconds behind that.  James was delighted with his run and feels he is on his way back to peak fitness again.  Alan O’Hara deprived Brendan Teer of  fourth place with his North Belfast colleague Eamon White in sixth place after a hat trick of fourth places though still retaining his Over 40 crown.

HOW the LADIES Fared

Gladys Ganiel O’Neill again proved worthy of her favourite billing in the ladies race despite a hard half marathon run on the continent last weekend and improving her winning time to 35.18. Her North Belfast Harriers teammate Clare Connor was second with North Down’s Julie Balmer picking up third place for the third time in a row. A number of Personal Bests were set in the course of the race, most notably Tracey McDowell’s 45.08, a splendid time considering her involvement in organising and attending the pre-race pack collection on Friday and Saturday evenings and on Sunday morning. More details on club performances next week.

At the closing of the prizegiving the £500 holiday voucher was won by  Dromore AC’s David Allen.

A huge vote of thanks is extended to everyone who helped towards the success of the day, with a special Well Done to the members who helped with the pre-race registration and the band of members and friends who worked so hard at the post race refreshments in the Leisure Centre.  You are the reason so many people come back year after year, so Take a Bow.

Also to everyone who contributed sandwiches, cakes buns biscuits etc – the veritable feast of goodies on offer certainly broke the monotony of the Lenten season. Thanks are also extended to Down District Council Chairman Michael Coogan for his attendance at the start and afterwards at the prize giving ceremony, to the army of marshals,  Athletics NI officials,  to principal sponsor MB McGrady & Co, Chartered Accountants, the other event sponsors, Down District Council,  Dupes DVD and Video Duplication, Translink, Plus2Print, Wrap and Roll and Flowers by Tracey. A special word is due to the staff in Down Leisure Centre who worked so hard to assist the smooth running of events in the Centre and to the PSNI personnel who contributed significantly to the success of the race by their presence around the course. The overall feeling expressed was that the race had got the town buzzing from early morning and had set the day up for the subsequent on street entertainment and parade.]]>