<![CDATA[ <p style="text-align: justify;">LOCAL representatives in the Castlewellan area have condemned the dumping of a trailer load of toxic fuel waste on the roadside on the Dublin Road last Friday evening at around 4pm on (17 May).

A container truck containing 26 barrels of laundered fuel was abandoned at the side of the road past Burrenbridge coming out of Castlewellan towards Kilcoo. The NIEA has agreed with Down District Council that it will be removed on Tuesday but there is no agreement yet as to who shoulders the cost for this operation. 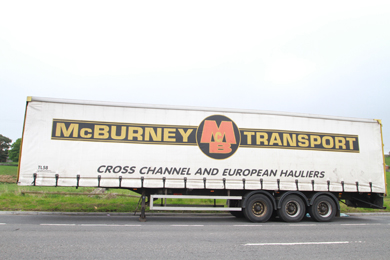 The abandoned curtain sider lorry on the Dublin Road near Castlewellan with a load of toxic fuel waste on board.[/caption]

A spokesperson for the Department of Environment said: “The DoE and NIEA have shown good authoritive, firm action and a responsible approach to this latest fuel laundering crime. NIEA has, on a rolling basis,  been at the site on Friday, Saturday, Sunday and Monday. Inspections at the weekend confirmed that no oily waste material has impacted on any local water way and after further inspection today (Monday) the situation remains stable.

“On being made aware of the incident, NIEA immediately visited the site on Friday and liaised with the PSNI. There was a minor leakage of liquid waste at that time and the NIEA Inspector immediately employed pollution preventive measures to absorb the leakage and prevent it getting into any local waterway.

“The NIEA Inspector again inspected the scene at 10am on Sat morning and again at 12.30 pm when some further absorbance were deployed as an additional pollution prevention measure.

“The NIEA Inspector was back on the site on Sunday to carry out a further assessment.  The site was revisited on Sunday evening by an NIEA Senior Water Quality Inspector for the area. He found the situation stable with the absorbents placed by NIEA continuing to prevent any leakage to the environment. The site was inspected again on Monday morning and the situation was the same as the night before. The absorbent material and absorbent boom deployed over the weekend are working well and there is no indication that any of the laundered diesel that  leaked out of the trailer has reached the storm drain.

“The measures to control any leakage are the right ones. If more was needed, more measures would have been taken. DoE reassures local people that water courses are protected.”

The spokesperson added that the removal of the trailer falls to the local council as, unlike most other Councils, they did not enter into the fly tipping protocol with the DoE. As the Minister reported during the week, the Protocol  has seen close to £500,000 spent by DoE cleaning up waste, mostly from fuel laundering.

“The Protocol and the cost,  the escalation of enforcement through potential removal of operators licences and other measures show how serious Minister Attwood and DoE are on fuel smuggling. 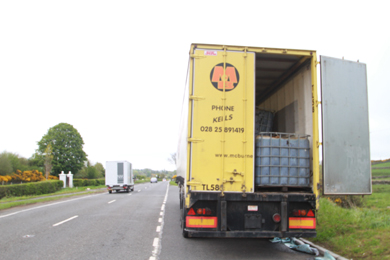 A rear view of the trailer showing the square containers with the waste fuel.[/caption]

“The Minister has advised NIEA to clean up the site should it become required. DOE understands that Down District  Council are in the process of arranging a contractor to remove the trailer. If this does not happen promptly DoE will move in. It is because of DoE action to date the situation is stable. The Minister believes that everybody should do everything in their power to isolate the problem and help the authorities deal with the fuel laundering gangs and the organised crime they represents.”

When the NIEA was alerted, a Senior Water Quality Inspector (SWQI) travelled to the scene to investigate the report, arriving at 17.15hrs. The Inspector liaised with the PSNI Officers present and it was estimated that the lorry contained around 25 Intermediate Bulk Containers (IBCs) containing laundering waste, mostly ‘fuller’s earth’ and ‘cat litter’ which are used to remove the colour from marked diesel.

From discussions with the PSNI, the lorry, which had the logo of McBurney Transport, had been stolen at an earlier time. The PSNI indicated that they would monitor the lorry over the next few days to prevent any interference or vandalism.

The NIEA Inspector reassessed the scene at 10.00hrs on Saturday 18 May and again at 12.30hrs when some further absorbents were deployed as a additional pollution prevention measure. The Senior Environmental Health Officer of the Council made further contact with NIEA on Saturday

Councillor Carmel O’Boyle, Chair of Down PCSP, said: “I was alerted to this incident on Friday evening. On Monday the truck was still sitting on the roadside although the leakage, probably from just one of the containers, has now slowed down to a small drip, although on Friday it was causing a significant spillage. The likelihood is that the driver of this illegal fuel consignment noticed  that fuel was leaking and decided to dump the whole load rather than continue on his journey.

“The result is that there is now pollution on the road that will cost either the NIEA or Down District Council anywhere between £5- 10,000 to clean up, depending on the method used by the criminals to filter the fuel. Where the responsibility for cleaning up such pollution lies is a grey area and it is a moot point whether it is for the NIEA or the Council to deal with it. In any event, we expect the clean-up to begin in the coming days, and at least the leakage now seems to have stopped.

“The laundering of fuel is a criminal activity and one that needs to be stopped. If there was not a demand for this illegal fuel, then there would be no supply. People must realise that this is not a victimless crime and it is a moral issue as well. For as long as people condone this activity, criminals will make money from it. The PSNI continue to make inroads into blocking the activities of these people who are bent upon making money without any consideration for the serious environmental damage incidents such as the one on Friday night has the potential to cause.”

Adding his weight to the widespread concerns, SDLP Councillor Eamonn O’Neill, Environment Committee Chairman, expressed his deep concern at the dumping of a lorry of illegal fuel outside Castlewellan . He said: “This is one of the worst acts of criminal irresponsibility that I have ever come across. The potential danger to local people and to our environment does not bear thinking about.

“Right smack in the middle of one of our most beautiful parts of the country with a magnificent tourist potential this act was an attack on our community and what we try to do to better it. The lorry had sprung a leak and those who had been in it clearly abandoned it to save their own skins without a care for our local people. A protective and absorbent “bund” had to be placed around it until it could be dealt with on Monday. I am absolutely appalled by the reckless and wanton irresponsibility of those involved”

Councillor O’Neill added:  “Now it is our local council who has the responsibility to clean up this mess. It is our local rates that will have to be used. It is most unfair that a council has to pay for this when conceivable it is only passing through your district. This is a central government problem and not a local government problem. In addition several of our council’s senior officers had to send a lot of valuable time over the weekend and on Monday to ensure that everything was correctly and legally done. Hopefully, it will all be removed safely this Monday evening

ALLIANCE Party Down District Councillor Patrick Clarke said it was “irresponsible” to abandon a stolen curtain side lorry unit full of illegal laundered fuel outside Castlewellan. He said: “These wreckless criminals have no regard for the environment or public health and safety.”

Councillor Clarke who visited the scene on Saturday morning where the illegal laundered fuel waste had been left added: “Some of the cubes inside the curtain side lorry unit containing the fuel waste were leaking onto the roadside.  The PSNI, Northern Ireland Environmental Agency and Down District Council have been notified of the incident.

“I am very perplexed that people would have deliberately left a curtain side lorry unit which is full of cubes holding illegal laundered fuel waste on the main Dublin road outside Castlewellan.

“The dumping of illegally laundered fuel waste is costing ratepayers thousands of pounds every year by Councils having to remove the waste and these sums are coming straight from the rates of local people.”

“There was absolutely no regard whatsoever for the environment or the public health and safety of local residents living near the Dublin Road.

“There is obviously a market for cheap petrol and diesel due to the present high prices at the petrol forecourts, but people unknowingly purchasing cheap fuel are only lining the pockets of criminals who are laundering illegal fuel then are dumping the fuel waste.”

UKIP local representative  Alan Lewis has condemned those that abandoned a lorry trailer filled with toxic waste outside Castlewellan and has called on nationalist politicians to back the national crime agency.
He said: “It is clear that those parties opposed to the introduction of the national crime agency are aiding organised criminals. The selfish politicking of pan-nationalism is allowing fuel smuggling to run rampant in Northern Ireland. I call upon the SDLP and Sinn Fein to forget mythical fantasises of spies and concentrate on the real cost of their continual block on the NCA, illegal fuel gangs are reaping the benefits of their illegally obtained profits while the rate payer pays to clean up their mess.
“I am sure we will see crocodile tears from local nationalist politicians over this incident  highly hypocritical when their parties oppose an agency which would be dedicated to dismantling these illegal crime gangs.”
]]>

October 21, 2020
We use cookies to ensure that we give you the best experience on our website. If you continue to use this site we will assume that you are happy with it.Ok