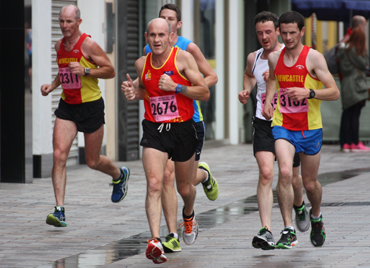 EDAC runner Dee Murray in action with local runners from Down.[/caption] The third running of the Belfast City Half Marathon on Sunday morning saw the third different start location, with this year’s race beginning on Ormeau Embankment and finishing at the nearby Ozone Centre writes Joe Quinn.  Initial reaction to the new route was very favourable though there is no guarantee it won’t change again before next year’s race. BRENDAN TAKES ON THE AFRICANS Anyway Benny Teer was in the field this time, as part of his build up for this year’s Dublin Marathon and was quickly at the head of affairs in the company of Jimmy’s Ten winner Gideon Kimosop and his fellow Kenyan Dan Tanui, with ex- Annadale Strider and now Slieve Gullion Runners Paddy Hamilton making up the leading quartet. The Africans had opened up a winning lead by halfway but Hamilton and Teer were together until a severe stitch at around 8 miles caused Benny to slow, leaving Hamilton clear in 3rd place. Gideon was declared the winner although his time dead [caption id="attachment_58933" align="alignleft" width="250"] 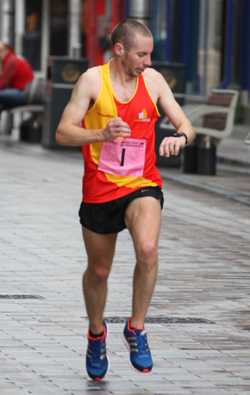 Brendan Teer checking his time in City Centre on his way to 4th place overall and the Silver medal in the NI Half Marathon Championships.[/caption] heated with Tanui’s and Benny was comfortably in 4th place, just under a minute and a half behind Hamilton. The bonus for Benny was that he posted a new PB of 70.35 thus giving his confidence a massive boost. SOUTHERN COMFORT Declan Teague, who last year set a PB of 1.25.30 in this race went to Dublin this time, for a change of scenery and improved his time again to 1.25.02 in Saturday’s Half Marathon, in Phoenix Park, where Michael McKeown clocked 1.33.45. FRANCIS LEADS THE CHARGE Francis Tumelty was an absolute revelation, coming in with a low profile, following a lightly raced start to the season, to post 1.21.03 with Dee Murray, 1.25.33 and Neil Andrews 1.25.50 also claiming Pbs. Mark O’Connor’s 1.28.42 may not have been a PB but nevertheless was a commendable effort as he balances training needs with tendencies to injury, work commitments etc, which tend to be the ever present dilemma for non-professional runners everywhere. Gareth Kelly also ran superbly, showing the effects of regular tempo runs by clipping 4 minutes off his previous best with his 1.36.20 timing. David Smith’s 1.38.13 was an excellent debut run while James Magennis 1.39.51 was more than happy with his time, having stated beforehand he was hoping for a sub 1.40! [caption id="attachment_58934" align="alignright" width="390"] 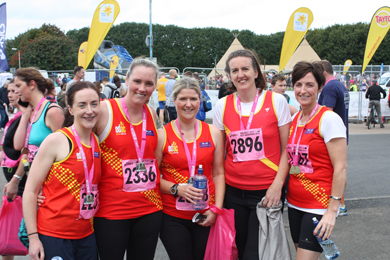 L to R Niamh Kellett, Janine Murray, Mags Flynn, Cheryl Denvir and Lisa Milligan happily posing after Sunday’s Belfast Half marathon[/caption] TIME TO FACE THE MUSIC Gerard McAuley was an excellent pacer for Gavin Hynds, guiding him to an inspiring 1.39.48 with Kevin McCormick 1.41.40, a new PB and one of only two of the 27 East Down runners to slip under my gaze – he must get a new Club vest – finishing just ahead of the” great to see you out again” Stephen McCartan 1.42.13 in the company of Phillip Vint. Kristoffer Fegan equally performed similar pacing duties for Lisa Burke, both completing in 1.47.03, more PBs there too. The other non-spotted runner was the ever consistent John Manley who recorded 1.47.24. Gary Small I saw several times but he like many others, seemed engrossed with whatever was playing through his earphones on his way to a 2.02.25 clocking, which raises the question what do runners listen to? I’m sure that across the age groups a wide range of music is listened to and I can understand that up to a point, e.g. when you’re training on your own – but during the biggest Half Marathon in NI, when there are thousands of runners around you and tens of thousands along the streets cheering you on? I’m sure there is a perfectly reasonable explanation – I’d love to hear it though, if not necessarily the music. NIAMH – LADY IN WAITING? [caption id="attachment_58935" align="alignleft" width="260"] 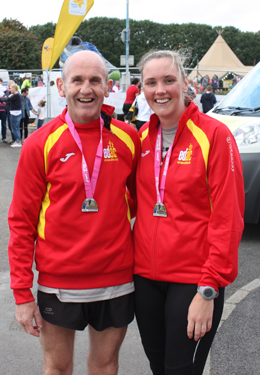 Dee and Janine Murray after both set new PB’s in Sunday’s Belfast Half Marathon.[/caption] So how did the Ladies do? The answer? Superbly well. Niamh Kellett has been in pretty good form recently in 5 Mile and 10K races but came to the start line for her first attempt at the Half Marathon distance understandably apprehensive and a little nervous. However she showed he mark of a top quality runner with a good appreciation of her pace and was fairly flying in the closing few miles, courtesy of a classic negative split, crossing the line in 1.32.07. A splendid time and one which I have no doubt she will better considerably in the not too distant future. PBs or NOT Pbs? Alison Gilliland 1.37.32 was the next to appear, showing strength and stamina over the second half and was followed home by Cheryl Denvir 1.42.13 and Lisa Burke in 1.47.03 all PBs. Another debutante was Janine Murray who has every reason to be pleased with her 1.56.11, while Mags Flynn 1.58.45, Roisin Gaffney 1.59.44, Lisa Milligan 1.54.03, by virtue of a second half almost 10 minutes faster then the first and Paula Savage, her 1.59.56 a new PB by almost 5 minutes, all ducked under the 2 hour barrier for the first time, Joanne Carson too was happy with her 2.01.37 and Sharon Carew though struggling from the early stages nevertheless kept plugging away and still raised a smile at the end, crossing the line in 2.09 .42 THANKS and CONGRATULATIONS A huge Well Done and Thanks for the memories to everyone and to the Newcastle, Murlough and Crossgar squads who took part too. On a perfect day for running I was about clapped out by the time you all had passed – first time I ever had blisters on my hand after a Half marathon, but good training for double the distance in Dublin in a few weeks time! COMING UP SOON It augurs well for the competitiveness to be expected among local clubs at the Road Relays in 2 weeks time or next Saturday’s 10K in Bangor. Unfortunately I shall miss not only both events but also the first round of the McGrady’s Financial Services Junior Cross Country League this coming Sunday in Castlewellan and the Comber Cup fixture, the first round of this season’s Cross Country League, on the 10th October, due to trans Atlantic commitments.  ]]>

Take Care Of Your Health During The Hot Weather

Devlin Says Join The Mourne Wall Party In The Park