Police in in the town are now appealing for information following the burglary. Sometime between 5pm on Monday evening 15 April and 8.30am on Tuesday 16 April the robbers entered the premises and removed a safe containing a small sum of money leaving a trail of mess and destruction. The empty safe was discovered in a field nearby up St Patrick’s Avenue.
Shop manager Lee Parr said the when she arrived in the morning to open the shop she was “gutted”.
[caption id="attachment_38132" align="alignleft" width="390"] 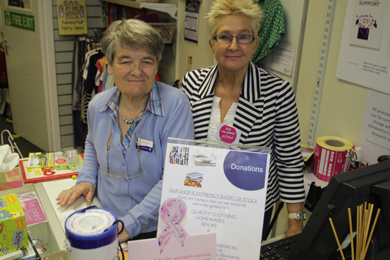 Cancer Research NI shop volunteer Mary Lou Mullan with shop manager Lee Parr pictured after the break-in.[/caption] She added: “When I opened the front door  in the shop I noticed immediately that the goods in the shop had been strewn all over the place. The area around where the till is was in a terrible state. They must have been looking for money or keys for the safe. The small money box was taken and when they left they took the safe.
“Local residents actually heard them banging on it with a sledge hammer and a crowbar. That is when the police were first alerted. Police found the safe and noticed a receipt in it which helped identify that it was ours. The thieves did not get much money for their efforts from the safe. The previous week had been our busiest week so far this year.
“The thieves even left behind the Euro coins we had in the till. There was quite a lot of mess as they had turned the shop over. They mustn’t  have been in a hurry. Now we will be faced with a repair bill because of the break-in and damage generally, and we will be installing further security measures which will be an added cost. As a small charity shop this is quite a big blow to us.
“We are certainly left with a hefty bill which will have to be met. Strangely, the thieves stole a good quality gents’ coat that we had and on display and left the hanger behind!”
Lee explained that the Downpatrick Cancer Research NI shop has 20 volunteers who she said were all dismayed at the break-in. She added: “In total when you add up the volunteer hours contributed they come to over 100 hours a week which amounts to approximately £40,000 in labour. This is a fantastic contribution by our volunteers.
“And we have two school girls on placement too who also help out. They are just a great team and this is such an important cause. Cancer is something that affects so many families so we have to support this as much as we can to get behind the campaign to support families and eventually control this terrible disease.”
Anyone who noticed any suspicious activity in the area is asked to contact police at Downpatrick on 0845 600 8000.  Alternatively you can contact the independent Crimestoppers charity on 0800 555 111.
]]>