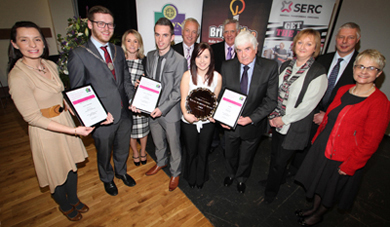 Young people’s enterprise and entrepreneurship skills were celebrated in style at the prestigious Dermot Curran Young Achievers Awards in Downpatrick at the Down Arts Centre on Friday 14 March 2014.

Congratulations were the order of the day to teams from local schools, students from South East Regional College (SERC), and to young entrepreneurs recently starting new businesses in Down district.

The eagerly awaited announcement of winners was revealed in front of an invited audience of VIP’s and young people nominated for this year’s awards, held at the Down Arts Centre, Downpatrick.

The Dermot Curran Young Achiever Award for 2014 was presented by Down District Council Vice Chairman, Councillor Gareth Sharvin, to Denise McClean of Crumble Cakes, a cake making and decorating business, who discovered that her hidden talent could be a route out of unemployment.

A Special Recognition Award was presented to 16-year old technologist and entrepreneur John Neill. John has developed ‘Fon2Find’, a solution to finding lost keys, and is representing Down, Northern Ireland and the UK in technology competitions in the USA.

The South East Regional College (East Down) Awards were presented to individuals and to the winning student company by SERC Schools Partnership Manager, Richard Armstrong. 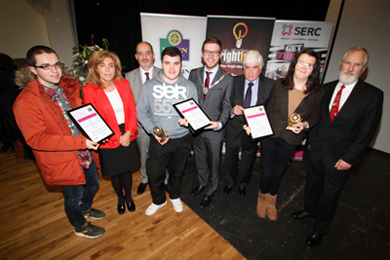 During the awards ceremony, certificates of commendation were also presented to those entrants who had particularly impressed the judges.

The  Awards are designed to recognise outstanding individuals who have demonstrated the entrepreneurial spirit and determination needed to achieve success in the world of business and specifically to recognise the contribution made by young people.”

Councillor Dermot Curran added, “We must look to those who can be more entrepreneurial and innovative to bring their skills to the challenges that face us in business and in the wider economy. Success comes through identifying challenges and seeking to overcome those challenges.  Young people learn more and mature more quickly through this process, becoming the capable leaders and business people we will depend on for our future.”

Newry Mourne And Down District Council Gets New Chair