<![CDATA[ <p style="text-align: justify;">WHEN parents and children turned up to council playparks during Easter weekend across Down District they were met with locked gates.

Immediately anger rose that children were locked out of new state-of-the-art playparks and local councillors were soon receiving calls from irate constituents and parents complaining. The sun was shining and it was perfect weather for a day at the playpark.

SDLP Downpatrick Councillor Colin McGrath said that the district’s play parks that are locked and secured each day should be open when people want to use them most. 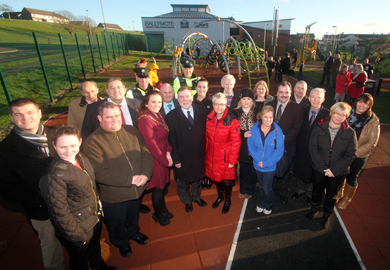 Officially opened several months ago, the Ballymote playpark is one of several in Down District that faced closure at the Easter weekend because of Council arrangements but these are now being examined.[/caption]

Officially opened several months ago, the Ballymote playpark is one of several in Down District that faced closure at the Easter weekend because of Council arrangements but these are now being examined.

“However, this can cause problems on Sundays and at holiday times when centres open reduced hours and as such the parks open for reduced hours.

“An example would be the Ballymote play park in Downpatrick which would be scheduled to be closed from Holy Thursday until Easter Tuesday in line with that centres opening hours.

“To reduce this park’s opening hours to this level is ridiculous – these are the very times that children will want to use them most.

“I proposed that a solution be found to the Ballymote problem immediately and an investigation into the whole problem of play park opening hours be carried out and a solution sought.

“Council cannot be spending ratepayers money on superb play facilities only to lock them up when they are needed most.”

The Ballynahinch man said: “People in the local area are really annoyed and left frustrated at this decision. It’s bad enough that local people have to put-up with the outdated play facilities day and daily but to lock them up on one of the busiest weekends of the year is pure madness.

“This decision is symptomatic of a Council who have no idea how to provide adequate recreation facilities for the people of Ballynahinch. I make no apologies for demanding fit-for-purpose play facilities for our young people and local families. It is simply not acceptable to expect our kids to play on the street in 2014.”