<![CDATA[ <p style="text-align: justify;">THE lead authority on renewable energy in Northern Ireland, Action Renewables, is calling on companies in County Down who are leading the way in their sustainability practices to enter the company’s 2014 awards scheme. 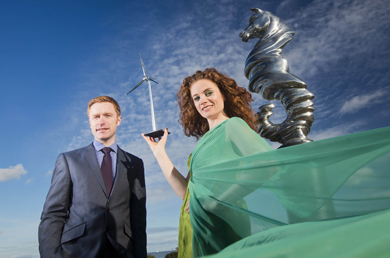 Pictured at the launch of the Awards at the new Belfast Seahorse sculpture is ‘Green Goddess’ Collette O’Neill and Andrew Ryan from Awards sponsors, Tughans Solicitors. The awards, now in their sixth year, take place in Stormont Hotel on 20th March 2014.[/caption]

The annual awards, supported by Tughans Solicitors, are now in their sixth year and will take place in Stormont Hotel on 20 March 2014.

Open to all companies across County Down and Northern Ireland, businesses are being asked to demonstrate their commitment to the development and growth of the ‘green’ industry and submit entries by 31 January 2014. The judging panel consisting of representative from Action Renewables, Jim Kitchen,  Director Sustainable NI, Norman Aspley, CEO of Northern Ireland Science Park, Dr Stephen McKay, Senior Lecturer at the School of Planning, Architecture and Civil Engineering in Queen’s University, Belfast and Geraint Ellis, Chair of Environmental Planning at Queen’s University, Belfast.

Speaking at the launch, Michael Doran, Director Action Renewables said: “Sustainability makes good business sense and there are surprising benefits and costs savings to be made.  We want to reward those companies who have introduced renewable energy initiatives within their businesses and are making a real effort to lead by examples while lessening their environmental impact.”

Andrew Ryan, Partner from Tughans Solicitors added: “As an advisor to many new and established renewables businesses in Northern Ireland, the continued innovation and drive that we see in this sector deserves the recognition that these awards bring. Tughans are delighted to be sponsoring these awards for the fourth year in a row and their growth over those years shows how important this sector has become for the Northern Ireland environment and economy.”

To download an entry pack, exhibit or book a place at the awards visit: