<![CDATA[ <p style="text-align: justify;">Assumption Grammar School pupils have walked away with a trip to Brussels after debating at Stormont recently.

The team, made up of six form pupils Molly Edgar, Laura Dagens and Ciara Hunt, were taking part in a Mock Council of the European Union, representing Slovenia, and were joined by 28 other teams from across Northern Ireland. [caption id="attachment_59989" align="alignleft" width="390"] 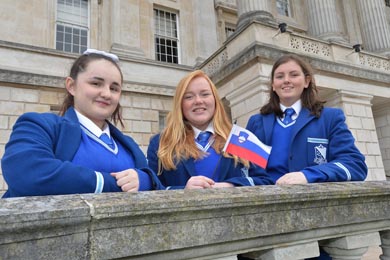 At this year’s Mock Council of the European Union, Assumption Grammar Girls (from left), Molly Edgar, Laura Dagens and Ciara Hunt, representing Slovenia, were the lucky winners of a trip to Brussels.[/caption]

Now in its 11th year, the annual event is organised by British Council Northern Ireland and the European Commission Office in Northern Ireland, and sees the students recreate the environment of a real Council of the EU meeting, tackling two topical issues – this year, debating on the current migration crisis in the Mediterranean and the EU’s €315bn Investment Plan.

Chaired by Jane Morrice from the European Economic and Social Committee, the debate saw Greece, represented by Lurgan College, come under fire in both debates, while Belfast High School and Bangor Grammar, acting as the UK and Finland, were also in the spotlight.

Speaking after the event, Colette FitzGerald, Head of the European Commission Office in Northern Ireland, said: “We are delighted to support events for young people such as the Mock Council, which provide an ideal forum for students to gain a greater awareness of the European Union and the significant opportunities that it brings to Northern Ireland.

“At this event the students can learn in a practical way how political negotiations at EU level can influence their daily lives.”

He said: “The British Council is committed to providing international opportunities to schools in Northern Ireland and we firmly believe that a global outlook can enhance the skills and employability of young people in the global marketplace.

“Programmes like the Mock Council of the European Union provide an opportunity for students to research, debate and collaborate on issues but from the perspective of other European countries. Such intercultural skills can only enhance future careers and prospects.”

For more information on the Mock Council or any other programme available through the British Council visit: 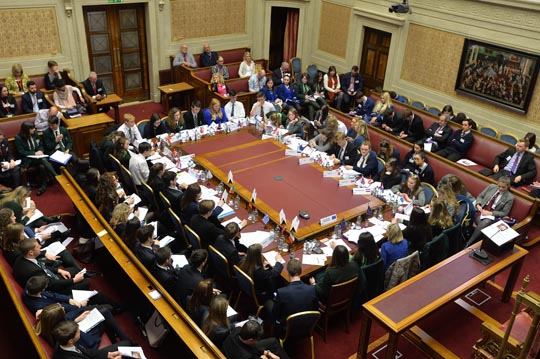 The Mock Council of the European Union debate in full swing at Stormont.[/caption]  ]]>