<![CDATA[ <p style="text-align: justify;">Ards Leisure Centre is celebrating the success of one its staff members who has been crowned a Northern Ireland body building champion. 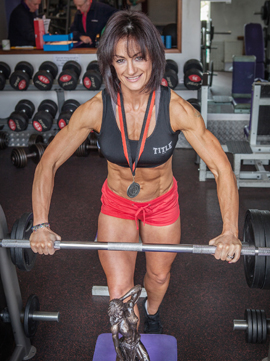 Gillian Bradley, a fitness instructor at the centre, won the ‘trained figure’ category at the Northern Ireland Body Building Championships last weekend, taking the title ahead of seven other competitors. Her success follows months of training to meet the exacting competitive standards, including daily gym workouts and a strict dietary regime.  Proud of her achievement, Gillian is already working hard towards competing in the British Championships. She said: “My family, friends and colleagues have been tremendously supportive over the last few months and I could not have achieved this success without their support. Although it is very hard work at times, it is worth the effort and if I can do it, anyone can. I would encourage everyone who wants to get a fit body to get some advice from an expert and start training at their local fitness centre” Ian O’Neill, General Manager of Ards Borough Council’s leisure service, was delighted at Gillian’s success and added: “Gillian has worked tremendously hard to prepare for the competition and this is a great achievement for her. She not only shows huge personal commitment to her training, but also to her job where her example, advice and encouragement help motivate our members. She is a real asset to our staff and our customers and we wish her every success at the British championships”. Gillian will represent Northern Ireland at the British Championships which will be held in Southport on 25 May.