<![CDATA[ <p style="text-align: justify;">An Ards instrument maker has met American music makers, presenting the band with a unique ceramic ‘Diddly Bow’  Andrew Cooke, who fashions musical instruments from clay, presented Hayseed Dixie, the US ‘rockgrass’ band who recently stole the show at Harvest Music Festival in Greyabbey, with a handcrafted, one-string Diddly Bow, which is based on an American blues folk instrument. 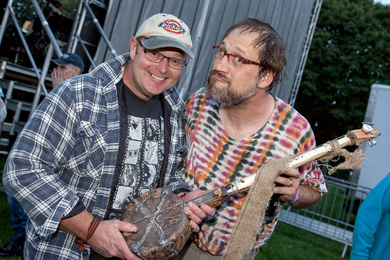 Andrew puts his own twist on the process by making the body from ceramic, which is then embossed with textures and glazed to give it a look of having been used for decades. The neck is made from an antique stair spindle and the unique sound comes from the hand-wound electronic pickup, which then connects to an amplifier. The meeting was between the maker and the band was made possible by Ards Borough Council, who staged the festival, and the Newtownards-based craftsman, was delighted that a band, which tours internationally, will now also be bringing one of his instruments along. Andrew said: “I enjoy experimenting with materials and techniques and clay lends itself to my interpretation of traditional folk Instruments. I take impressions from objects I have collected over the years like old American number plates and transfer them onto the clay surface, I make and hand wind the magnetic pickups, I source the reclaimed wood from derelict buildings .

“To me my work is firstly sculptural and an instrument second, In the right hands they have the potential to be a great sounding instrument; the real buzz is when a musician takes my work and gives it life and thanks to Ards Borough Council,  Hayseed Dixie will certainly do that”. Mayor of Ards, Councillor Stephen McIlveen, said: “Bring one of our very own talented makers together with Hayseed Dixie, a band which performs across the world, was an opportunity not to be missed and the Council was happy to help. Not only does it serve to promote Andrew’s unusual and beautiful work, but also to showcase the quality of our creative industry generally”.