<![CDATA[ <p style="text-align: justify;">The anxiety of legal matters is not something that the everyday person relishes.

Four members of Ardglass Development Association (ADA) have been under the eagle eye of the police and Public Prosecution Service for nine months and have now been given a clean bill of health. The four will not face any police or court action following a complaint to the Downpatrick police made by directors of Phenncick Cove Developments (PCD) in 2013. 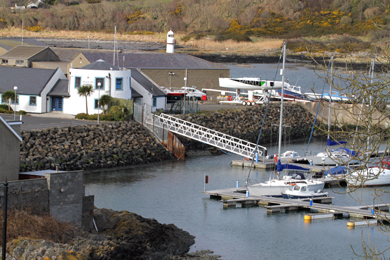 Ardglass marina is at the centre of a regeneration row and is being asked by Charities Commission NI to register as a charity.[/caption]

Ardglass marina is now at the centre of a regeneration query and is being asked by the Charities Commission to register as a charity.

However back in 1993, a project was formed and a limited company set up to implement manage the marina and in 1997 this group separated from the Association. Despite early attempts to rectify this move, PCD, a company limited by guarantee, continued to manage the project.

Recently following further investigations by ADA, new documentation came to light which ADA members claim proves that the marina was never intended to operate as a separate legal entity from the Association and that all monies generated should reasonably come back to local regeneration through ADA.

In an attempt to rectify this matter, several members of ADA registered as directors of the PCD company in May 2013 but their registration was struck off at Companies House following an action by PCD directors.

A difficult position ensued and marina directors complained to the police about the activities of the four ADA members who were subsequently questioned in Bangor police station. No charges were made at that time and the case was referred to the PPS.

On  27 July 2014, after many months, the PPS finally sent out letters to the four ADA members saying there would be no further actions by the police. The letter said: “… the PPS decided having considered the evidence not to prosecute in relation to an incident between 8th day of May and 26th day of June (2013)“.

Speaking to Down News after the matter had been finally resolved with the police and that no prosecutions were to be made, ADA Chairperson Mary McCargo said on behalf of those questioned: “On behalf of the four who were put under significant pressure all these months I would like to say that I am delighted that the PPS has decided not to proceed with this matter. This case has dragged on just too long and has added to the difficulties in Ardglass that we are trying to address instead of trying to solve them.

“Fundamentally, there should be one development association in the village, the one that was set up at a public meeting in 1991 to manage local regeneration. The people of Portaferry manage well with their regeneration model of good community action so we too should be kicking with the same foot instead of kicking each other.

“We have got to get over this problem or we will never have effective inward investment, job creation programmes, social and environmental improvements done in a co-ordinated and strategic manner. For some reason ADA has been treated poorly by several agencies and we intend to repair  this problem.

“It is significant that two of the four who were questioned by the police were disabled people. It was their cases that prompted a new round of inquiry into the marina issue.

“Phennick Cove Developments has as a result of an action by ADA been referred to the Charities Commission NI a year ago and it has now been requested by the Charieties Commission NI to register as a charity. This will be a significant step forward but we have quite a long way to go yet. We therefore call on the support of all groups, businesses and individuals in Ardglass to back us on our campaign to have the marina back to where it should have been in the first place… that is, working for the people of Ardglass. It is our community’s regeneration flagship after all.

“The IFI letter of 4th February 1994 to the project applicant, which was the Association, referred  to “Ardglass and District Development Association trading as Phennick Cove Developments“. This offer of IFI funding was in fact subsequently signed and accepted by Association members.

“We have the letter of offer and the letter of acceptance and much more evidence. We all do really need to be talking about this with each other. A solution needs to be found quickly as Ardglass will lose out on funding opportunities. We need to be stepping forward with our best foot. This also impacts heavily on social cohesion within our community “

Phennick Cove Developments director Fred Curran said: “We cannot comment at the minute as two of our directors are away on holidays. However, we are still considering the option of taking a civil case against the four ADA members.”

This row will linger on for some time yet, and meanwhile there is a growing unrest in Ardglass at the matter not being finally resolved.