<![CDATA[ <p style="text-align: justify;">An inaugural meeting of Down Coastal Rowing Club (Ardglass Branch) was held this evening in the village at the Ardglass Development Association (ADA) drop-in centre in Bath Street. A steering committee was formed to fully set up the local group. 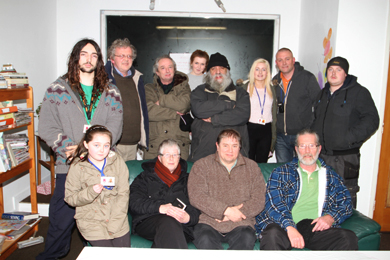 Local enthusiasts have formed an Ardglass branch of the Down Coastal Rowing Club. Included is Cllr Cadogan Enright, second right front, a member of the Strangford Lough and Lecale Partnership.[/caption]

The meeting explored the way forward to promote the activity of coastal rowing as a recreational sport in the area and it was agreeed to set up a local branch similar to that being done in other communities around the Lecale coastal area under the auspices of the main Down Coastal Rowing Club (DCRC).

“These St Ayle’s skiffs which have a strong international following, will be built by local enthusiasts and rowed by people in their communities. There is a great opportunity for a healthy inter-community rivalry which will no doubt be a feature of the main festivals in east Down in the summer time in the near future.

“The Ardglass branch is now seeking members to join up. All persons joining the Ardglass branch will also be required to join the Down Coastal Rowing Club (DCRC), the overall organisation which will co-ordinate much of the developments etc. (Cost of membership fee is £5).

“If  you think you may have a useful set of skills in boat-building such as woodworking, painting etc, why not get involved? It is expected that each skiff takes up to 800 work hours to complete and a team is required to see this project through.”

There is also another application pending funding for a further two skiffs with the South East Area fishing community programme and if this is successful it is hoped to work in partnership with other communities locally to complete these two skiffs over the next year. It will add to the capacity for Ardglass to hold interactive events with other communities such as in Ardglass festival and rowing events as well as participating in the overall events organsied by the Down Coastal Rowing Club. It can also be used for fundraising opportunities for local groups and charities.

Fancy rowing to get fit and enjoy a healthy hobby? Could you row to the Isle of Man or even down to Killough from Ardglass, or on a sponsored row as part of a team? Are you competitive and want to row against teams from the Lecale and futher afield? Would you row in Scotland in a ‘home international’ ? Or do you just want to enjoy a quiet row on a lovely summer’s day around the Ardglass pier. If so, the Down Rowing Club is for you. Come along and enjoy the craic.

A St Ayle’s Cutter pulling through the waves. A great way to get fit and healthy and try out something different.[/caption]        ]]>