An estimated 25,000 plus crowd attended the festival parade celebration.

Archbishop Justin Welby took part in an early day holy communion service at Saul Church, the site of one of St Patrick’s first churches, then made the two-mile pilgrimage walk to Down Cathedral from Saul. 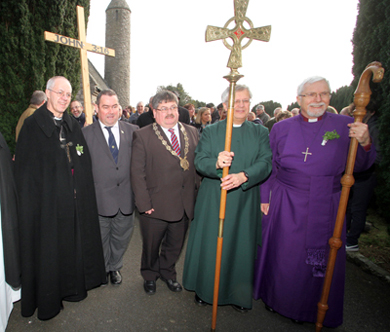 The Archbishop of Cantebury, Justin Welby, with Down Council Chairman Cllr Billy Walker, Cllr Terry Andrews and the Very Rev Henry Hull, Dean of Down Cathedral, and the Bishop of Down and Dromore, the Rt Rev Harold Miller.[/caption]

At Down Cathedral he preached about reconciliation. He then took part in the festival parade walking through Downpatrick among other members of the clergy of all denominations and local politicians.

The parade was the high point of the St Patrick’s Festival and proved to be a truly exciting cross-communty event of the highest order. A number of church groups and cultural organisations from both sides of the community were involved including Downpatrick Presbyterian Church. This festival was a triumph for the organisers Down District Council as a last gesture before it ends on the 31 March and the new super-council of Newry Mourne and Down District Council takes over.

In attending the St Patrick’s Day celebrations, Archbishop Welby  preached at Down Cathedral and encouraged young people from across the Protestant-Catholic divide to be peacemakers in their different walks of life. 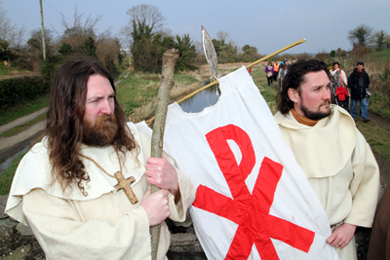 A young St Patrick, left, stands at the Slaney River where he landed first in Ireland during a re-enactment.[/caption]

The Archbishop, who has made reconciliation a key priority for his ministry, is the first Archbishop of Canterbury in 50 years to visit the burial place of St Patrick in Downpatrick, County Down, on St Patrick’s Day. He was visiting County Down as a guest of Bishop of Down and Dromore Harold Miller.

Archbishop Justin Welby led prayers at St Patrick’s grave at Down Cathedral in Downpatrick following laying of a wreath after the festive service. The service was attended by the primate of the Church of Ireland, Archbishop of Armagh Richard Clarke, as well as South Down MP Margaret Ritchie. [caption id="attachment_55507" align="alignleft" width="390"] 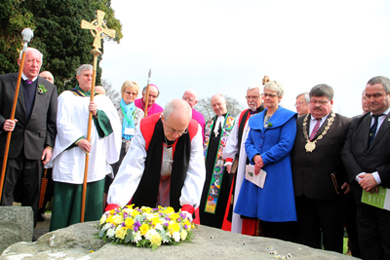 The Archbishop of Canterbury Justin Welby lays a wreath on the grave of St Patrick at Down cathedral in Downpatrick.[/caption]

In his sermon the Archbishop said: “The world needs the witness of those who have made the journey from enemy to friend, who are no longer strangers and aliens, who are being built together into an altogether different community in the household of God. And if there is any community who knows this, not simply in heads but in hearts, it is here in Northern Ireland.

“There remain huge challenges, because reconciliation is a fragile flower that always finds itself in the cold climate of the human heart, and can only be nurtured by the warmth of love, of fellowship, of mutuality, of the Spirit of God from whom it comes. 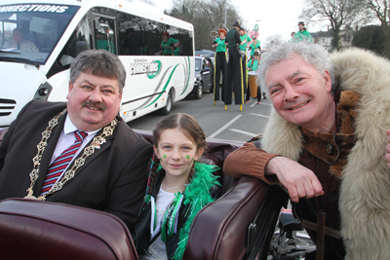 St Patrick chats to Down Council Chairman Cllr Billy Walker and his grand-daugher Rianna McKeever just before the parade starts.[/caption]

“Despite those challenges you have embarked with enormous courage on the long road to reconciliation and you are the symbol of hope for so many around the world. Don’t give up. Make it work. It is a gift of God toyouforthe world. It is held in your hands as a treasure. It is something that comes from the peace of God.”

After the service the Archbishop laid a wreath on St Patrick’s grave before joining a parade through Downpatrick attended by an estimated 30,000 people.

Also on St Patrick’s day morning,  the Archbishop joined the World Methodist Vice-President, Gillian Kingston, at Downpatrick Methodist Church to launch a new cooperation plan for the Anglican and Methodist Churches.   He later that evening spoke to around 300 young people involved in peace work, at an event to encourage those aged 16-30 with a faith perspective to make their voices heard. [caption id="attachment_55509" align="alignleft" width="270"] 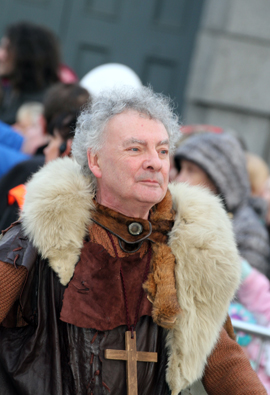 St Patrick in the parade in Downpatrick.[/caption]

Concluding the visit to Northern Ireland, the Archbishop had breakfast next day with 20-30 year olds working in politics, business, Church, media and academia. The event aimed to inspire young leaders to be peacemakers in their various spheres of influence, across the Protestant-Catholic divide, but also peacemakers with respect to conflict with refugees, with other faiths and in other areas of society and civic life.

The streets of Downpatrick were lined with people and for the first time they were even packed into Irish Street to get a view of St Patrick and the many floats. The Downpatrick festival parade is the second biggest one on Northern Ireland, the biggest being in Belfast. And its popularity is increasing.

There were many old chestnuts in the parade but there was certainly a brilliant splash of colour as always from the Mainstay DRP. The incredible hard work that many voluntary groups and businesses put in is unbelievable and this energy is transforming the way we think as a society.

The visit of the Archbishop of Cantebury almost overshadowed the great work that many church and faith groups have done in preparing floats etc. But their efforts from the Downpatrick Lions, the RGU, and Chinese performers, the local schools, the bands, and many many other groups all came together in an extravaganza second to none. 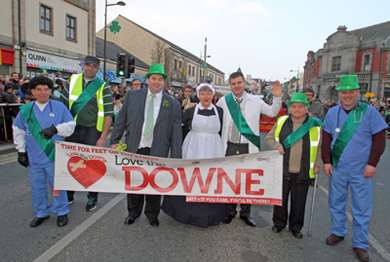 The Down Community Health Committee put up a great float in the parade and received much support from the crowd.[/caption]

Certainly the Down Community Health Committee’s float and body of support continued their public awareness ‘Love the Downe’ campaign and it was very well received as they walked along Market Street.

On the day there was little evidence of rowdyism and underage drinking. The quiet but effective police presence no doubt kept that under control, but generally the parade was a happy affair with everyone enjoying the moment.

This year there seemed to be more walkers at Saul Church, and certainly more media coverage from the TV channels. The presence of the Archbishop was no doubt key in this, but for a number of years the festival has been growing in stature  and is now certainly part of the tourism architecture of County Down surpassing other local festivals. Down District has much of the St Patrick’s and early Christian built heritage assets and the narrative of St Patrick including his burial place.

So no doubt for years to come the St Patrick’s product will grow and develop, and with it will come reconciliation, a slow but inevitable process. 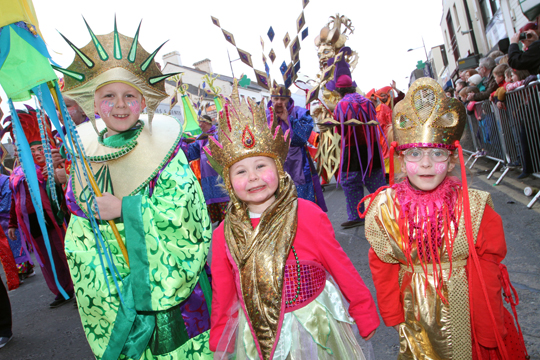 Smiling faces from the Mainstay DRP section of the parade.[/caption]]]>