<![CDATA[ <p style="text-align: justify;">It wasn’t an argument over a sheet of paper but literally may be deemed so.

At the full meeting of Down District Council on Monday evening (28 October), Unionist Councillors expressed their serious apprehensions about being asked to use Council headed letter-headed paper with a bilingual logos including the Irish language.

UUP Councillor Robert Burgess said it was “extremely offensive” for Unionists to be asked to use the recently redesigned notepaper.

Councillor Billy Walker (DUP) added that he was not happy with using a logo in the Irish language and will continue to use the older styled Council notepaper in protest. He said: “This is just being forced on Unionists.” 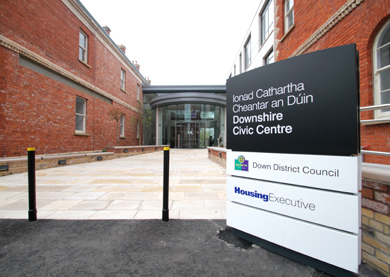 There was a row at Down District Council over the use of an Irish language logo on new Council headed notepaper.[/caption]

Independent Councillor Cadogan Enright, a fluent Irish speaker, said: “Individual Councillors don’t have the right to disagree with this decision. It has been agreed by Council.” Councillor Eamonn O’Neill (SDLP) also ratified this point.

As the debate wore on, DUP Councillor William Dick said that he thought that Council policy could be changed at full Council meetings.  Councillor John Doris (SDLP) agreed that it had been Council policy for some time that decisions can be changeg to alter Council policy, but in this case the only decision possible was around which Council logo Councillors wished to adopt for its notepaper from a choice of two logos.

“The policy is to be implemented using “Progressive Realisation” defined as the Council will take steps with a view to achieving progressively the full realisation of the Bilingual Policy using affordable resources. This acknowledges that some of the rights (for example public speaking through the medium of Irish) may be difficult in practice to achieve in a short period of time and  be subject to resource constraints, but requires the Council to act as best it can within its means.

“The Bilingual policy applies to all Council business and functions and is intended to deliver linguistic equality for all who avail of and / or provide Council services.”

Down News understands that the Unionist parties in South Down are unhappy about the future political prospects following the shadow Council election in May 2014 for the new South Down super council when Down District joins with Newry and Mourne District Council.

One Unionist councillor  said South Down will become “a cold house for Unionists” after the election when nationalist parties are expected to dominate the new council.

Alan Lewis, the Down District UKIP representative, is calling on the bilingual policy at Down District Council to be deferred and brought before elected South Down council in 2014 with a proper financial analysis. He said: “This isn’t a bilingual policy this is an Irish language policy. I question why the Irish language has been given equal status with English when according to the 2011 census results 89% of people in this district have no understanding of the Irish language…” To read the rest of the UKIP article, follow the link: UKIP Challenges Irish Language Use In Down District Council      ]]>

Post-Primary Admissions Announcement From The EA