<![CDATA[ACTRESS Rebecca Vaughan (Dyad Productions) has developed a strong following amongst Down Arts Centre audiences for her one-woman shows, and we are delighted to welcome her back to the Centre on Sunday 10 February at 4pm to perform her new show, <em>Female Gothic. An artist, gripped by the clutching fingers of a dead past; a scientist, defying nature in the dark realm of the senses; an expectant father driven mad by creeping shadows… In the unquiet, Stygian darkness between life and death, a lone, haunted woman tells chilling tales of the macabre and uncanny, of love, loss, death and the darkness beyond, illuminating the curious frailties of human nature. [caption id="attachment_35732" align="alignleft" width="390"] 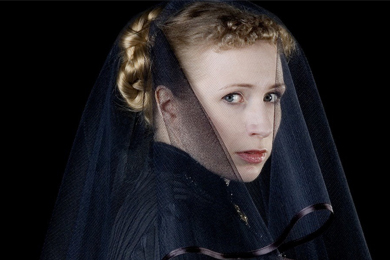 Rebecca Vaughn in Female Gothic in the Down Arts Centre on 2 February. [/caption] The Victorian fascination with tales of mystery and the supernatural created an enduring legacy of Gothic fiction; but it is often the male writers that we remember.  Today, Charles Dickens, M R James and Edgar Allen Poe continue to be celebrated, yet many of the brilliant, thrilling and eerie ghost stories created by the great and incredibly popular female writers of that era – Mary Shelley, George Eliot, Edith Wharton for example – have gathered dust and been forgotten.  Until now! Female Gothic had its debut in Edinburgh in 2012, garnering a host of five-star reviews and comments from the press that included ‘A masterclass in storytelling. Chilling, haunting, dazzling. Brilliant’ (Hairline); ‘This is how horror ought to be done. It will chill your blood to the marrow’, (The Carrick) and ‘A near perfect piece of theatre.’ (The Scotsman) Dyad Productions creates, produces and tours classic theatre with an innovative and contemporary emphasis.  This dark celebration of Female Gothic is their fourth original production in as many years.  Previous works, Austen’s Women, I, Elizabeth and The Diaries of Adam and Eve garnering five-star reviews at Edinburgh and Adelaide Fringe Festivals and were performed to great acclaim as part of the Down Arts Centre programme in Downpatrick and Newcastle. Female Gothic is written and performed by Rebecca Vaughan (writer/actor: Austen’s Women, I, Elizabeth; actor: The Diaries of Adam and Eve) and continues the successful collaboration between Dyad and director Guy Masterson. To purchase tickets (£10 / £8) and for further information on any Down Arts Centre events, please contact the Box Office on 028 4461 0747. The complete Down Arts Centre Season Programme is available to download at www.downartscentre.com