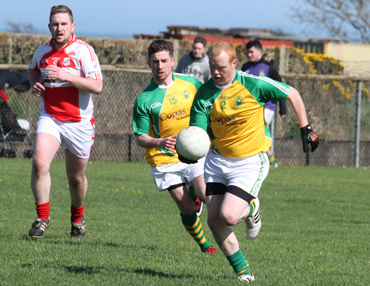 Ardglass has played two games and lost this year then won two and are now a team to watch. Management have rebuilt the senior section and have an eager well disciplined squad ready and able to do the business. Today they were clinical in their despatching of the visitors St Michael’s with a goal within the first minute.

With a move that began with midfielder Stephen Rooney crossing to Chris O’Connor, the ball went to David Armstrong who made no mistake burying it into the back of the net. This was followed by a point in play by Rooney and from the onset it looked as though the visitors were going to have a tough time.

At six minutes the St Michael’s keeper gave away a penalty which was converted by Mark Armstrong. The pressure continued with David Pullen and Owen Curran notching up two more points and Ardglass were in the driving seat. St Michael’s were playing into the wind and it wasn’t until the 12th minute they actually made an unsuccessful effort at the Ardglass posts.

The speed of  the Ardglass breaks, quick tackling and attacks was too much for the visitors they did persist only to have a few wides. David Armstrong on form made a blistering run through and volleyed at the goal, the shot just being finger-tipped away by the keeper. Mark Armstrong and Owen Curran  then took points and at this point but Curran then pulled up with a hamstring injury and left the field. 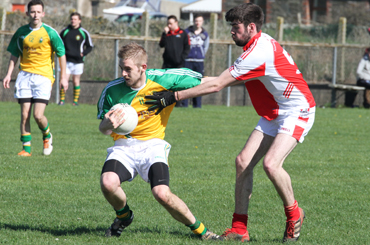 St Michael’s stepped up the effort to try and retrieve some ground in lost points but Ardglass held them scoreless until the second half.

The second period saw Ardglass again make a quick attack and keeping up the pressure but a great run through the middle from Malachy Crangle saw him line up and blast in a great goal to the top left corner with style.

As a relatively young and new team Ardglass were impressive showing a considerable discipline and work rate.

Soon after St Michael’s forward Eamonn Lynch scored a goal to keep his team alive and encouraged they won another point. Matty Teggart then clocked up a point in play fro Ardglass.

Then as the match was drawing to a close, the St Michael’s keeper kicked out and the ball was plucked from the air and crossed to David Armstrong who penetrated the St Michael’s defence and fed the ball to Teggart who closed the scoring with a goal.

Even when St Michael’s had the wind advantage in the second half, they failed to capitalise, hitting wide in the swirling wind with their efforts. 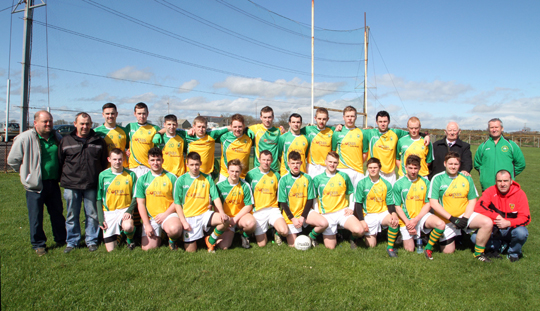 The Ardglass 2014 senior squad at Ardtole with their new strip from Copus Technologies. [/caption]